Sirfetch’d is one of many new species trainers can capture in Pokemon Sword and Shield. It evolves from Galarian Farfetch’d but where can you find this Pokemon and how does it evolve?

Unfortunately, those who own Pokemon Shield won’t be able to get these new species without trading because its exclusive to Pokemon Sword. This will disappoint a lot of trainers as a Farfetch’d evolution has been anticipated ever since the days of the Kanto region over 20 years ago.

However, there’s a similar situation for those who own the Shield version of the game. Perhaps even more so than Sirfetch’d, trainers have been awaiting the chance to get hold of Galarian Ponyta, a Pokemon which is exclusive to the Sword version. 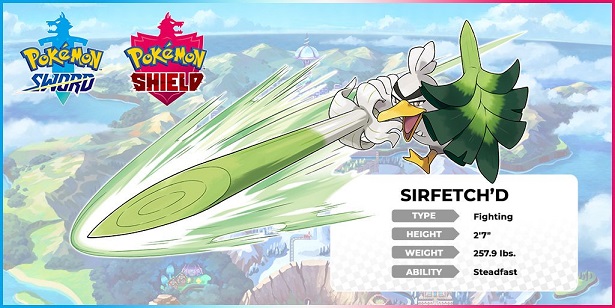 So, unless you’ve decided to get the dual pack, you’ll need to find a friend (or go online) and find someone to trade it with. There are various other Pokemon which are version exclusives, too.

You’re going to need to find Farfetch’d to get Sirfetch’d as the latter doesn’t spawn anywhere in the Galar region. It’s a rare spawn and can only be found in two locations.

It will only appear in the overworld, so don’t bother looking for it in tall grass, you won’t find it! Its spawn locations and rarity are as follows:

It’s also worth noting any Farfetch’d you do find will be the Galarian form of it, you won’t be able to find its original Kanto form.

How to evolve Farfetch’d?

Evolving Farfetch’d is different to all other Pokemon in Sword and Shield. Most will evolve at a certain level, some with a particular evolution stone and there’s even one example where you need to turn your Nintendo Switch upside down!

Farfetch’d can evolve at any level after landing three critical hits in one battle. This might sound pretty easy but it’s actually a little more tricky than it seems.

The first thing you can do is to make sure the Farfetch’d you catch is holding a Leek. This is a held item that increases the critical hit ratio of the Pokemon that is holding it.

Another way to make evolving it easier is to learn Leaf Blade at level 55, which is a move that has a higher chance of being a critical hit. However, the highest level Farfetch’d you can find in the Galar wild is level 30, so you’ll need to wait a while to get there.

As we all know critical hits can often prove extremely damaging, and for what we’re trying to here, maybe too damaging. To compensate for this try and find Pokemon on a similar level. You can also participate in double battles where you should have more chances to land those three ‘crit’ hits.