Niantic have revealed the next phase of Pokemon Go’s evolution by adding battle mechanics to the long-standing mobile game.

Charge moves will now require you to swipe some form of pattern, as opposed to just excessively tapping. It appears the idea is to swipe as many of the move-type icons as possible. The changes are available for you to try for yourselves following the 1.117.0 update.

Niantic also highlighted these changes in a short video on July 15, via one of their Twitter accounts. The video showed a Feraligatr using its charge move, Hydro Pump and a Scizor using an unknown move but with a distinctly different pattern.

Trainers, two feature revamps are coming to Pokémon GO! We are rolling out an updated appraisal system to give you more detailed information on your Pokémon's stats, and will soon be updating the Charged Attack mechanic in Trainer Battles. Watch for a preview! pic.twitter.com/0MaIjrxx8f

Depending on how well you swipe the pattern, moves will vary between nice, great and excellent – similar to how it appears when throwing Pokemon balls – causing more damage accordingly. While it is still early days since the update, more powerful moves will presumably have slightly harder patterns.

Niantic have clearly taken inspiration from other mobile games who use similar concepts, as also seen in their Harry Potter: Wizards Unite game. It’s a change which in truth is long overdue as some trainers were growing tired of the repetitive nature of battling. 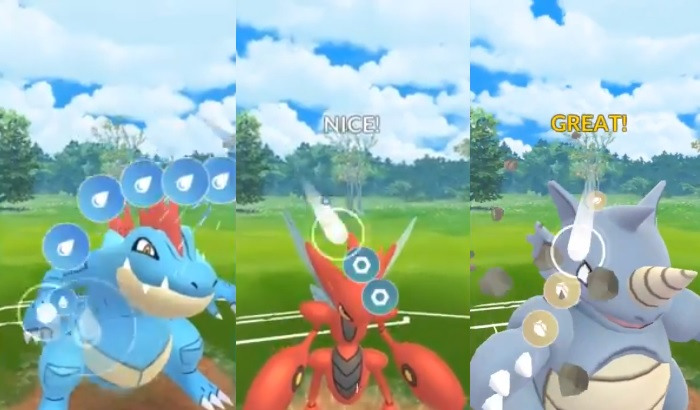 PvP battles were added to Pokemon Go in December 2018 and gym battles have been there since release. Despite the big change last year, trainers never really gravitated to the new mode and this was likely due to the fact that battles were nothing more than tapping repeatedly for a quick attack, then tapping again to implement the charge move.

The new added layer of skill could reinvigorate competitive battling in Pokemon Go and it’s great to see Niantic not resting on their laurels, continually trying to improve the game.

Following this addition, adding Team Rocket to the Pokemon Go storyline, new modes and an ever growing list of Pokemon, Niantic are clearly intent on keeping Pokemon Go around for a long time yet.