The Overwatch Workshop continues to be a great way to introduce new elements to the 2016 title such as warmups, aim trainers and now a special 1v1 duel arena designed to enhance your combat skills.

In a post on r/Competitiveoverwatch, MrPig100 posted some screenshots of the game mode. The photos show that all around Lijang Tower Control Center there are isolated spots known as “duel arenas” where 1v1s take place.

The game mode should now feel more engaging with larger player sizes, I also want to thank @KrauseMrpig100 for developing the new additions with me. pic.twitter.com/qUvdCT8WC9

The rules are quite simple. The first player to 50 points wins. There is a 10 hero rotation and every time you die, you get a new hero with the order randomized for each player.

Basically, the whole point is to stay in the “Main Arena” as long as possible, keep winning those 1v1s, rack up three pointers and get to 50 before anyone else.

Multi-Arena support and scoring explained in the picture below:

First to 50 points
10 hero rotation, you get a new hero every time you die, order of the heroes is randomized for each player
Heroes: Ana, Ashe, Doomfist, Genji, Hanzo, McCree, Soldier, Tracer, Widowmaker, Zenyatta pic.twitter.com/zxoXCdjgF7

On Twitter, Seita expanded on the mode writing, “The game mode should now feel more engaging with larger player sizes, I also want to thank @KrauseMrpig100 for developing the new additions with me.”

“It was great working on this together with you, looking forward to more interesting workshop projects!” MrPig replied in a retweet. 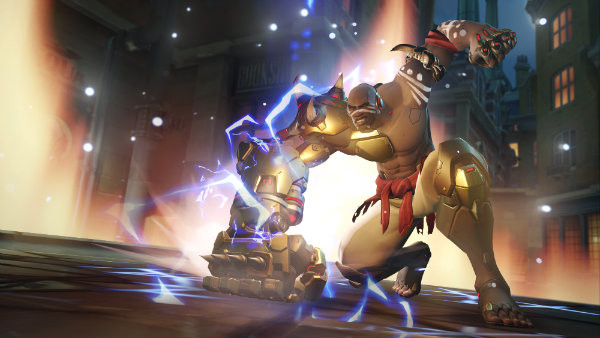 You can play as Doomfist in the 1v1Duel Arena mode.

“We hope you’ll enjoy this new game mode, either for a quick round with friends, as a warmup before going to comp/scrims or just playing it in a public lobby all day!” MrPig100 concluded in the Reddit post.

Considering this is still the mode’s first incarnation, there’s no telling what the two could have in store for the Overwatch community in the future. To try out the Duel Arena for yourself, load the code TXCXX to your custom game.