A new and devastating Symmetra strategy has been shown off in a recent Overwatch video from Akshon Esports, and the new tactic could just win you your next competitive match.

Having recently been the subject of a few design changes, Symmetra’s teleporter now allows for deployable objects to be sent through to the other side.

From D.va’s explosive ultimate to Torbjorn’s turrets, select items in the game can be instantly repositioned thanks to the handy teleporting ability. One crafty roster has used these changes to their advantage, devising a new strategy that seems all too difficult to counter.

In an October 3 YouTube video, Akshon Esports showcased a new Symmetra and Mei strategy that was coined ‘Ice-Bombing’ by Team Ireland of the 2019 Overwatch World Cup.

The play begins by placing Symmetra’s turrets on the ground. Deploying her teleporter directly on top of these turrets, then transports them to the position of the other portal. This can be used to flank enemies or advance straight into the enemy backline for surprise damage. 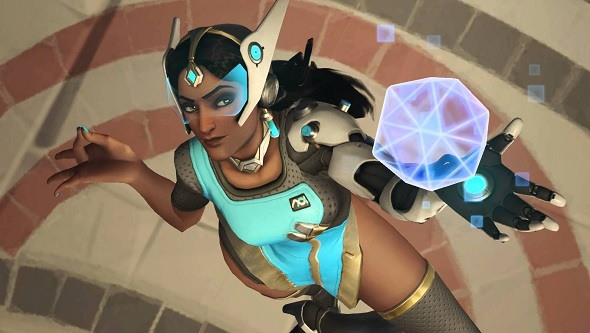 Symmetra’s teleporter has been the source of many devious plays lately.
[ad name=”article3″]

Contributing to the absurd potential of the strategy, if Mei follows the turrets through the teleporter and then activates her Ice Block ability, suddenly the powerful laser beams on the ground become completely encased and thus, immune to all damage.

If timed just right, and positioned perfectly within the enemy team, this wild play could catch the opposition completely by surprise, leading to immense damage and potentially a team fight win.

“It is really important that the team follows up with aggression,” says head coach Brian ‘Scrivzy’ Scriven of Team Ireland.

While the temporarily invincible turrets are in the backline, the remainder of the team should be pressing the pace and engaging in the fight. With so many targets and an overwhelming amount of damage coming through, “the enemy team will be unsure of what to do.”

The breakdown begins at the 3:28 mark of the Akshon Esports video below for mobile users.

Recently we’ve seen all manner of absurd teleporter tactics. From a flying Reinhardt on Temple of Anubis, to a Reaper bug that allows you to teleport as any hero in the game.

This wombo combo with Symmetra and Mei however, might just take the cake for the most powerful teleporter strategy in the current meta.