An alleged victim of DreamKazper’s posted a screenshot on Twitter with an apology the former Uprising DPS apparently sent to her.

Throughout the message, DreamKazper profusely apologizes to the female for “putting her through all this” and for apologizing publicly instead of directly to her.

However, the user mapIebIossom rejected DreamKazper’s apology later writing, “this dreamkazper s**t is making me feel so sick i wish this was finally over.”

She also reacted to the original Twitlonger post, writing, “ok wait F**K DREAMKAZPER HE A B***H DONT LET HIS DIRTY ASS COME BACK.”

im not gonna reply to him but i felt like this should be shared pic.twitter.com/LC5v88gRpG

In a Twitlonger post titled “I’m sorry”, DreamKazper apologized to anyone he hurt and claimed it was scary to speak out.

“I know it’s been a long time since I’ve reached out to anyone but it’s been really difficult and scary to even communicate or speak to anyone, it still is,” Sanchez wrote. “I have made bad decisions in my life that I take full responsibility for and will not make any excuses regarding it. I really want to apologize to everyone that I hurt during the situation and those that were involved in it.”

“Ever since that incident, I’ve been repenting my actions and working on myself to change because I want to become a better person towards those around me,” he added. The ‘incident’ and ‘bad decisions’ most likely refers to sexual misconduct allegations involving minors that surfaced in 2018.

During the league’s first season it came to light that DreamKazper had allegedly contacted two underage girls and apparently received nude photos of them after months of messages.

“I’m truly sorry to the people that were once inspired or looked up to me including past friends, teammates, fan and also the community as I feel that I have let them all down. I will continue to strive to work my hardest and improve myself as a person and a player,” he continued.

“I cannot change what has happened in the past but I will work to be a better person for the future. I know it might be difficult for anyone to forgive me for my actions and I’m not asking for forgiveness but It is never too late to make things right,” DreamKazper’s post concluded.

This was the first time he has ever spoken out or posted in public since his release from the Uprising. 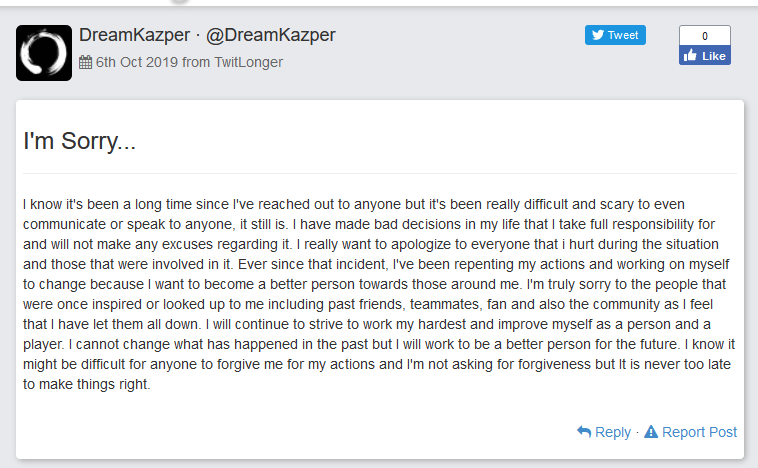 On September 17, Guangzhou Charge DPS Charlie ‘nero’ Zwarg uploaded a photo to Twitter showing a screengrab of an account called “repzakmaerd” (DreamKazper spelled backward). Nero then indicated that DreamKazper was still playing on his main account despite the controversy.

Earlier, it was revealed that the former pro was apparently boosting accounts to higher SR levels for money, something frowned upon by those in competitive circles.