On September 28, Minecraft developers at Minecon 2019 revealed that there would be some major changes coming to the ‘Nether’ dimension in an update for the popular sandbox title, and fans couldn’t be more overjoyed.

The Nether is one of the most iconic locations in Minecraft, and is a hell-like dimension deep below the surface that can only be accessed by users creating a ‘Nether portal’ with four obsidian wide and five of the same element in height making a frame with 14 blocks total.

However, devs for the sandbox title announced that the nightmarish area would be getting its biggest overhaul to date, with added biomes and new mob enemies. Fans took to social media to express their joy over the long-awaited update.

The iconic hell-like dimension is finally getting an overhaul with ‘The Nether Update’.
[ad name=”article2″]

Fans were surprised by the update

The Minecraft community had been calling for a cave revamp and were completely taken by surprise when a major update for the Nether was announced instead. After the shock wore off, fans on the official subreddit were overjoyed.

One useer posted “New biomes for the nether? I’m pretty excited for that!” with another replying “I know, right? That’s so crazy! Did they say they were going to add more biomes?” as the devs on stream had said that more would be added to the dimension later on.

The Minecraft community did not expect the Nether update, but were overjoyed by the announcement.
[ad name=”article3″]

Another person poked fun at the fact that the whole community had been rallying behind a cave update and would have been upset if they didn’t get it, but then were just as happy by the surprise announcement for the Nether.

“Everyone: We want a cave update. Mojang: We’ll give you a Nether update. Everyone: …or that!” 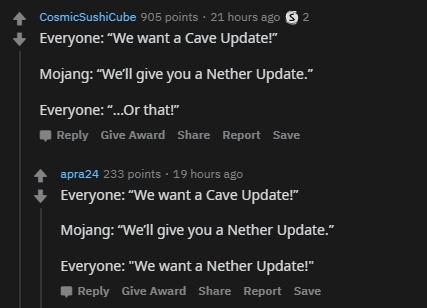 Reddit users joked about fans wanting the cave update, but gladly settled for the Nether instead.

“HELL YEAH! This is f**king awesome. The fact it’s vanilla is crazy!” one person exclaimed, happy to finally receive news on the update.

What’s in the new update?

The major update will bring two new Biomes to the Nether – ‘The Soulsand Valley’ and ‘The Netherwart Forest’ – giving players more unique locations to explore in the nightmarish dimension. The first contains blue fog, blue fire, soul sands, and fossils, while the second one has red or blue and is a deep forest with Nether fungi.

New mob enemies are also being added, and are called Piglins. These creatures will attack the player automatically, but are passive if you have gold armor. There is also a stronger iteration of them called Piglin Beasts.

The stronger type is always hostile towards the player and have much higher melee range then any other type. The beasts can be bred and used as a food source for those deranged enough to want to live there.

The official Minecraft Twitter account tweeted out a video showing off the new updates, and the changes coming to the Nether.

The next part of Minecraft to be updated is… The Nether! This scary place is about to become a lot more engaging! Explore brand new biomes like Soulsand Valley and Netherwart Forest, new mobs, trading (well, sort of) and more!

While Mojang hasn’t given a release date or gone into complete depth about what each of these new items and locations will do, players are still super excited for the largest overhaul of the iconic dimension.