A source with inside knowledge at Valve is reporting that the game developer is planning a “2.0 launch in 2020” for the Dota-inspired digital card game that has sported dismal numbers since launch. The source also provides some explanation on what went wrong for Artifact.

Looking back at the Dota 2 International 2017 crowd’s reaction to the Artifact reveals, it’s more sad than funny now. Well, it’s still pretty funny. The anticipation built through the crowd as fans wondered Artifact could be. A massive update? A Dota sequel? A new game entirely?

But when the words “The Dota Card Game” appeared on the screen, the communal groans of disappointment ended up being a telling sign for Valve’s newest project.

But it appears that Artifact is not yet completely dead, as a source has revealed that Artifact project lead Brandon Rhienhart “is working on retooling the game for a 2.0 launch sometime in 2020.”

Tyler McVicker, who operates the Valve News Network YouTube channel, posted a comment on the video titled “Valve’s Most Shameful Disaster” made by YouTuber Cr1TiKaL (aka penguinz0), and provided some context on Artifact’s short, disastrous run.

“The game was rushed due to pressures from Richard Garfield & Gabe Newell, the game was lied about in the lead up marking provided by Newell himself, and most importantly, Garfield demanded the monetization strategy above all else. Richard and his longtime creative partner were fired from Valve shortly after the game’s launch.”

“More than anything else, Artifact proved that when left unchecked for over a decade, a company like Valve can become so incredibly out of touch that they became convinced they knew what their audience wanted, more than the audience itself.”

Artifact’s launch was far below Valve’s standards, reaching a player peak of roughly 60,000. The game cost, and still does cost, $20 to play, and is loaded with microtransactions. After its release in November 2018, Artifact’s player base dropped at an exponential rate. From 11,000 average players in December, to around 750 in February, to less than 80 from June through August. 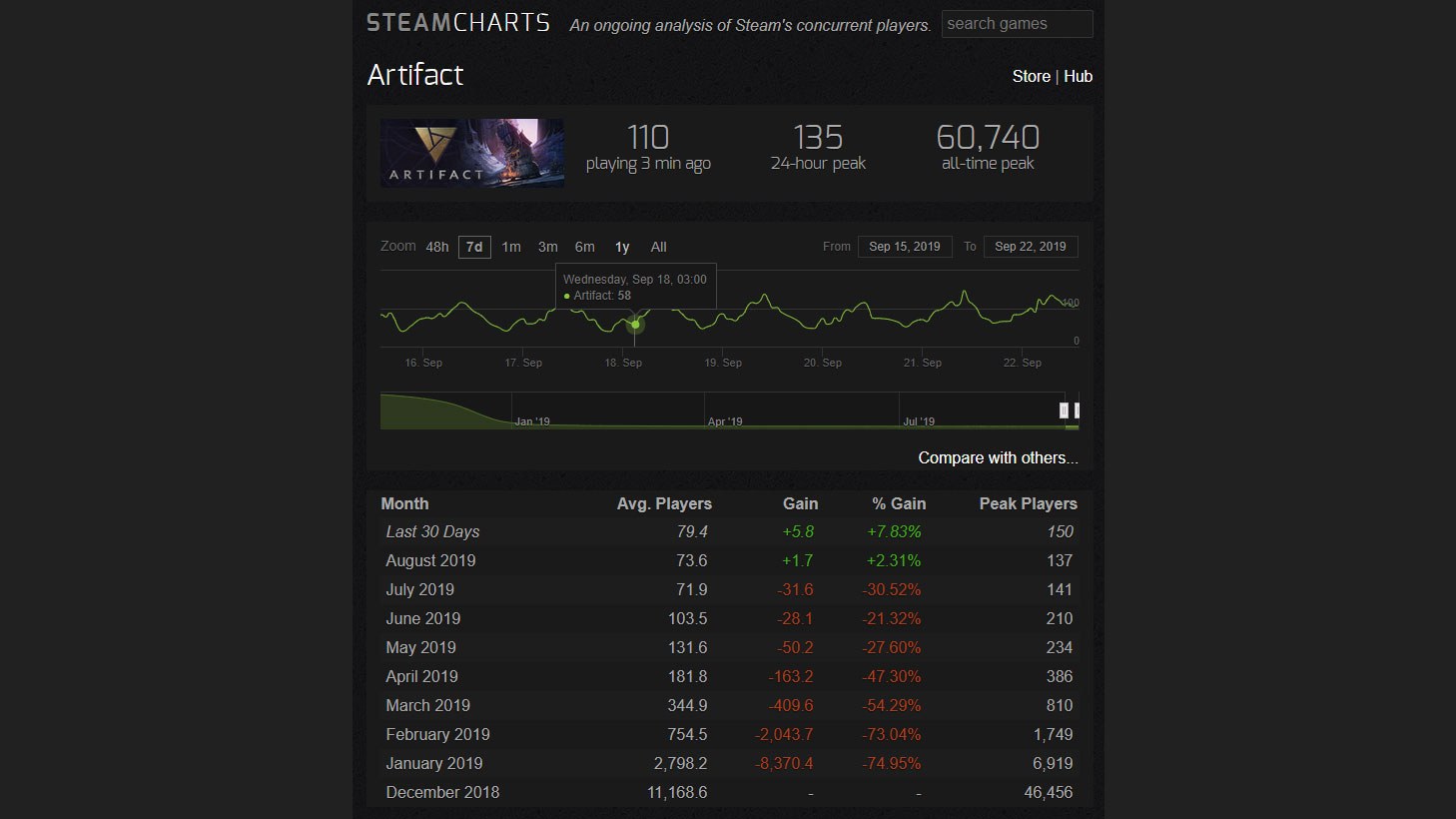 In his comment, McVicker alludes to a deeper story regarding the failed initial run of Artifact:

“The story of the game’s original pitch, development, announcement, hype cycle, launch, and death is far more nuanced and detailed then [Cr1TiKaL] is illustrating here, and it deserves to be told soon.”

Valve has invested much into their new autobattler title Dota Underlords, which is inspired by the Dota 2 mod Autochess. It’ll be interesting to see what changes they make to Artifact.