A creative fan has designed a new throwable weapon that would take the place of the Chiller trap item in Fortnite Battle Royale.

Dreamt up by Reddit user ‘Weinstein312’, the introduction of his new weapon would see the Chillers placed into the vault, and replaced with what he calls ‘Snow Bombs’.

Created to be thrown as a grenade, and designed to look like a snowball, the explosive portion of the weapon is replaced by the head of a snowman, featuring a carrot for a nose and a smiley face made out of coal.

The weapon would have an ‘Uncommon’ rarity level, and could be found in chests, supply drops or simply on the ground in stacks of three, with six being the maximum amount of Snow Bombs that players could carry in one stack.

Snow Bombs would work much like the Boogie Bomb, which forces players to dance for five seconds or until they take damage. The Snow Bomb would freeze enemy players in place for six seconds, giving players a chance to close the distance and take the first shot at their opponent. 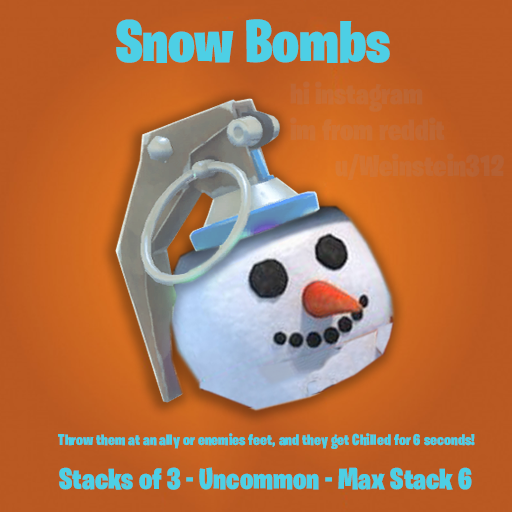 The Snow Bomb features a happy snowman’s face – just in time for the holidays.

The introduction of the Snow Bombs would be perfect in the lead up to Christmas, when Epic Games will likely begin to release some special edition holiday skins for players who would like to celebrate their love for the season in-game.

Unfortunately, the Snow Bomb is just a concept created by an avid Fortnite fan, and there are currently no plans for Epic Games to add the weapon into the battle royale title.