An interesting new concept for Fortnite Battle Royale would see the classic Gun Game mode come to the Epic Games title, but with a few twists.

Many players have tried to come up with a way to make Gun Game work in a battle royale environment but the core features of the two modes make it a difficult compromise.

However, Reddit user ‘-Praxis_’ has come up with an interesting new LTM (Limited Time Mode) suggestion called ‘All The Same’ which would put an interesting spin on Gun Game that could actually work.

Instead of players progressing through weapons with each kill, Praxis’ concept would see guns change every 45 seconds in a Solos match. No weapons would be available in loot, but a handful of items like Shield potions and the Grappler would be.

Praxis also suggested that there could be an initial cooldown period that would give players the chance to farm materials and find some items before the first weapon became available. 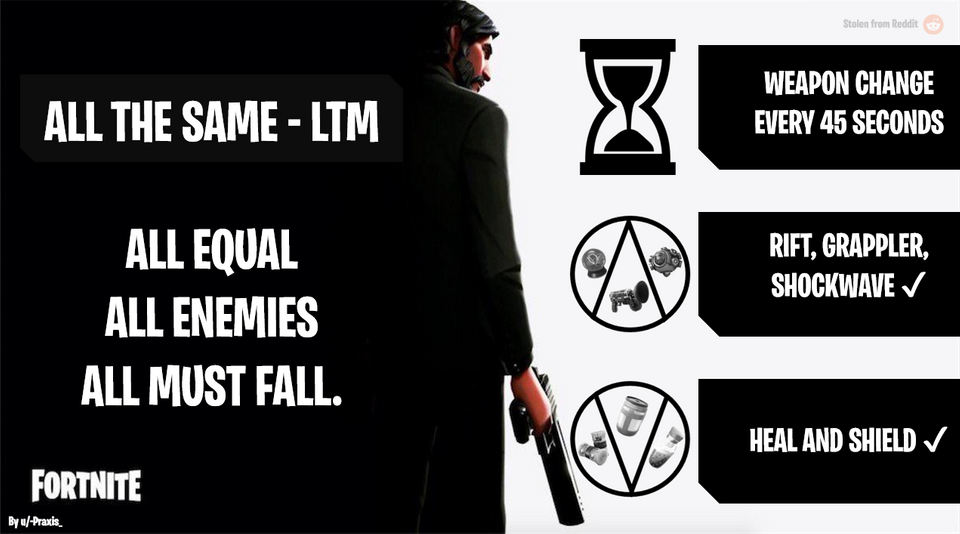 Gun Game is a popular party mode that has featured in some of the most popular shooters of all time, including various Call of Duty titles, and typically sees players compete to be the first to get a kill with each weapon.

Players might start with a commonly used assault rifle but will soon find themselves having to find a frag with a launcher or pistol that rarely gets any attention in the core game.

With the lack of respawn in battle royale, it is entirely possible that players would simply hide and wait until the final moments once they progressed onto a weapon that they feel comfortable on.

The rotation of weapons on a timer, however, would tackle some of these issues and could even result in some hilarious engagements where players find their shotguns switched out for crossbow mid-fight.