The Guided Missile weapon in Fortnite has fallen out of favor with a lot of players, but this fan made concept for a ‘Recon Drone’, would make for an excellent alternative.

The Guided Missile was previously vaulted and then brought back in to the battle royale mode, but its novelty has somewhat worn off, and its usefulness too.

Many players use it simply as a scouting tool, by getting to a safe spot and then directing the missile around the map to get vision on the surrounding area while staying cover.

However, in terms of lethal effectiveness, it is well beaten by the simpler, traditional Rocket Launcher, and now the new ‘Quad Launcher’ has put it further down the pecking order.

So, since it is used primarily as a scouting tool anyway, one creative Fortnite fan has come up with a replacement – an actual scouting item, in the form of a controllable recon drone.

The drone would be operated just like how you use the free cam in Replay Mode, and would have a finite battery life, only allowing three 15 second uses. 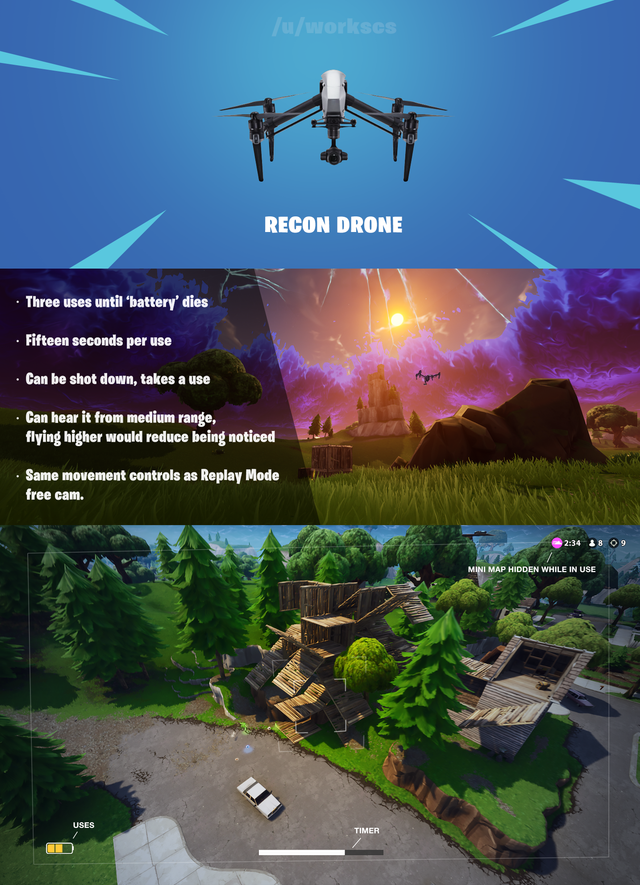 Enemy players would also be able to hear the drone and shoot it down, so it wouldn’t be all powerful, but still a very useful piece of equipment.

Given that Epic Games has already vaulted the Guided Missile before, and are always looking to the community for new ideas, there is a real possibility something like this could make it into the game.

With the Quad Launcher added in the latest update, v6.02, a lot of players feel there are now too many explosive weapons, and so replacing the Guided Missile would help with that issue too.