One of the aspects of Fortnite that longtime players often say they miss the most is the old menu music.

Despite the music having been completely changed several Seasons ago, many still long to listen to the old tunes.

Fortunately for those nostalgic players, a Reddit user named ‘drakeshe’ has created a program that can turn their dream into reality.

Called the ‘Fortnite Music Controller,’ the program allows players to listen to any music they want while in the menu of Fortnite, including the menu music of old. 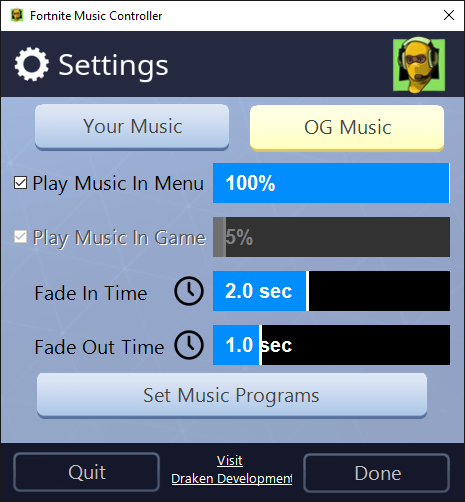 The key aspect of this program is that is uses mouse-visibility and color detection to know when a player is in-menu or in-game, in order to ensure that music only plays in the menu and not during gameplay.

Recently, an option of ‘OG Music’ was added to the controller, which plays the classic Fortnite theme music in place of the new one when selected.

A demonstration of how the program works can be seen in the video below.

The program operates in the background and has been designed to work with many different programs, including Spotify Chrome, Edge, Windows Groove Music, VLC, and more.

And for those who may worry about Epic Games banning them for using a third party software, the developer has stated that the program is not detectable by Epic’s anti-cheat scanners.

As of now, the Fortnite Music Controller is completely free to download and use, and players can download it by visiting the Draken Development website here.