NHL Teams Clamp Down on Their Players Mentioning Fortnite

Some teams in the NHL are requiring players to clean up their social media – and not because of risque posts.

A tweet by TSN correspondent Rick Westhead revealed that teams within the National Hockey League are asking their players to delete any posts on their social media accounts referencing Fortnite, a massively popular multiplayer battle royale game.

Westhead stated that the teams believe the game is a major distraction from players’ training.

“An OHL team employee tells me some players have been advised to scrub Fortnite references from  social media accounts. Some NHL teams consider the video game a major distraction/obsession.” 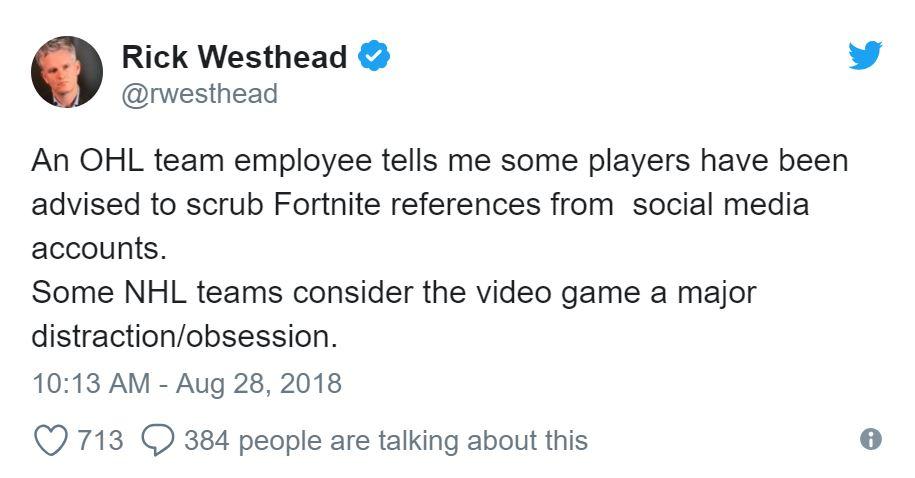 In an article from the Daily Herald, it was uncovered that teams across the board were asking players about their gaming activities, paying particular attention to Fortnite.

An NHL insider likewise told a reporter that a high draft pick for the League would never be chosen due to his obsession with the game. This struck fear in the board, who then made it an effort to discourage excessive gaming for their players.

Everett Silvertips player Riley Sutter was cited as stating that some of his fellow teammates were so into the game that they wouldn’t sleep, staying up all night in favor of playing.

“There’s definitely some guys around the league, some even on my [junior] team, that are pretty bad for it,” Sutter said. “It takes away from their sleeping and keeps them up late … It’s starting to become a pretty big issue.”

The League’s trainers and board members alike are concerned that the game will take away from players’ valuable training time and strict schedules, ultimately affecting their success. Social media scrubbing is one way of removing the game as a potential distraction – at least from the outside.