Full map showing locations of every zipline in Fortnite Season 8

Fortnite Season 8 has finally arrived and with it brought a host of new changes to the map.

The V8.00 Update for the game introduced three new Points of Interest to the game, a Volcano, Sunny Steps and Lazy Lagoon, and completely revamped the northeast corner of the map with new trees and huge changes to the landscape.

Avid Fortnite players will also have noticed that an item that was introduced to the map during Season 7 has also been altered, with the locations of a large number of ziplines updated to match the new-look Fortnite island.

With the introduction of Season 8, Epic Games have brought a number of new Ziplines to the north-east corner of the map surrounding Volcano and Sunny Steps, and have also added some near The Block, which is now located in the northwest corner of the island.

The developer has also removed a lot of ziplines from the middle of the map, specifically around Salty Springs and Dusty Divot, which has frustrated some Fortnite fans as this area can now be difficult to traverse.

Now, LootLake has put together a handy graphic which shows the location of every zipline, meaning that you will always know where you can find one and where they will take you to. 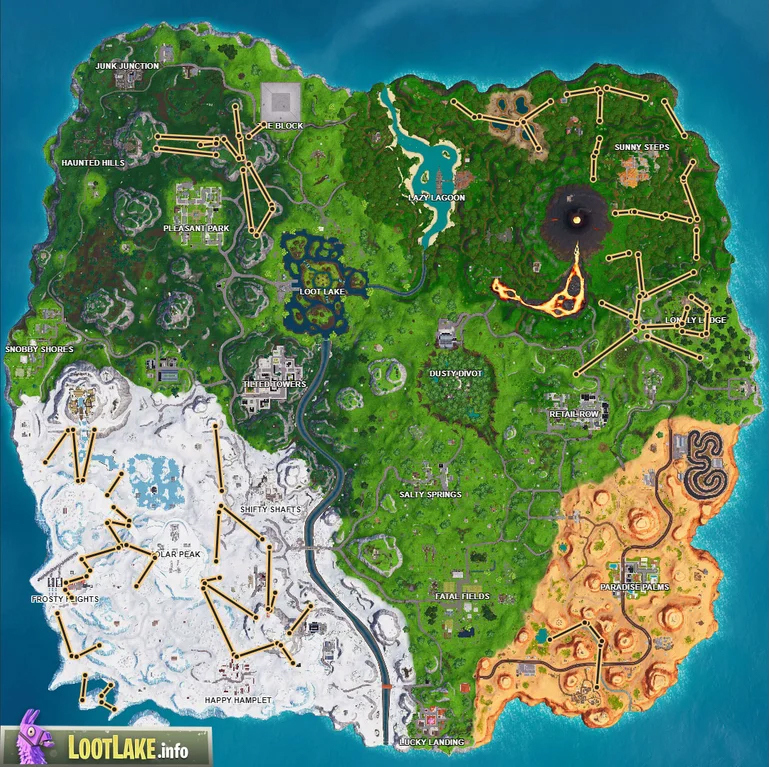 A look at all the locations of ziplines in Fortnite Season 8.

Ziplines can be an incredibly useful tool to quickly move around, often connecting locations together, meaning you don’t need to waste time or resources trying to move from one spot to another.

Whether Epic Games will add any more ziplines to the game in future updates in Season 8 is unknown, but knowing where you can find these handy movement features could be the difference between being eliminated and earning a Victory Royale.