Epic Games delay of any patch notes for Fortnite since the start of Chapter 2 drove some players to start a petition calling for the updates list release.

As with past updates in Chapter 2, Fortnite v11.11 arrived with no official patch notes to go along with it.

This situation has led to some players creating unofficial Fortnite patch notes of their own in an attempt to figure out exactly what’s going on during each update.

Epic Games so far have shared no reason for the absence of patch notes or even addressed the matter at the time of writing, which has led to players trying other ways to get their complaints heard.

A lot of people seem to want patch notes back

The Fortnite news account @FNBRHQ started the petition on Twitter, which said patch notes were needed “for the game to evolve.”

It also called on fans to “unite and sign” a change.org petition asking Epic Games to return the regular official patch notes.

We need Patch Notes for the game to evolve. It's a fact, not an opinion.

The online petition website may not have the ability actually to do anything about the problem. Still, a large number of signatures (over 2,500 at the time of writing) could show how many people want the notes back.

Patch Notes are crucial for the future of the game,” the online petition claims. “If the players of the game are not informed on what changes are being made, their decisions will remain private, and therefore, the game won’t be able to evolve or improve.”

In closing, the petition argues, “players can’t judge a change if they haven’t been informed of it.” 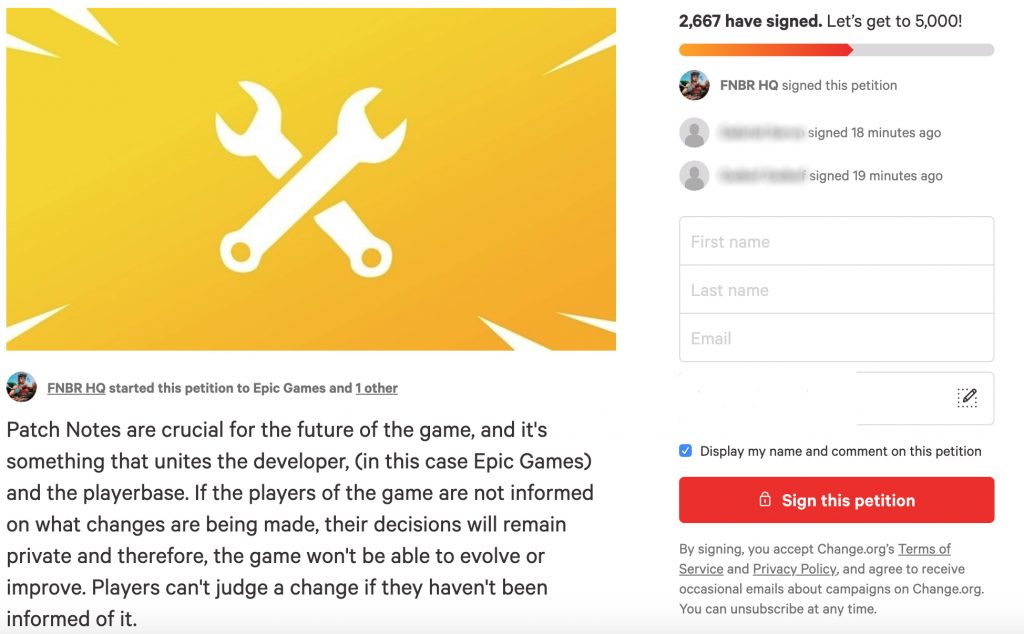 The petition had over 2,500 signatures on November 13.

Will we ever see patch notes again?

Epic Games has given no reason for the lack of patch notes in Chapter 2, but there are theories out there that claim the company is trying to give players an authentic Season One experience with no update lists.

Whatever the reason is, it doesn’t make sense from a competitive point of view either when a publisher removes basic patch notes on updates to the game, so players are aware of changes.

Read More: Where to find the hidden ‘I’ for Fortnite’s Week 6 Missions

Unfortunately for some players, patch notes’ whereabouts are currently as unknown as the official update list for Fortnite v11.11.