The continually changing Fortnite map looks to receive another update soon as a castle was spotted in the background of a new video.

Epic Games released a video showing off a new Emote, however the changes in the background of the video are grabbing all the attention.

First up, the Villain’s Lair that played a major role in the lead up to Season 5 is now missing.

The Villain’s Lair was the site of the rocket launch that ripped a hole in the sky and brought along all the Season 5 map changes.

The Viking Village, a recent edition to the Fortnite map, is also no longer visible.

The Vikings may be gone but another representation of ancient warriors could be on the way as a castle was spotted on the hills in the distance. 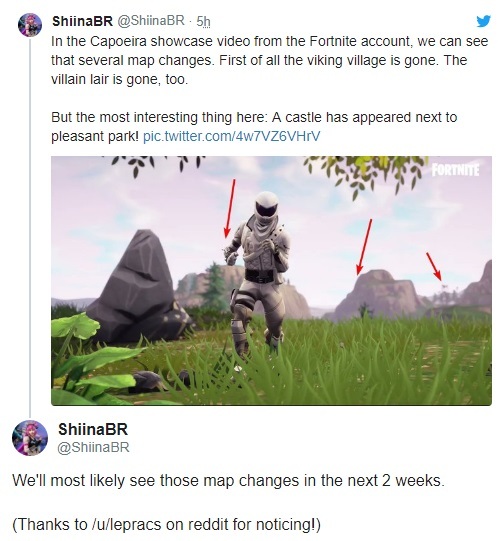 u/lepracs found a secret castle hidden in the back of the capoeira emote trailer. What if this is what the Crazy Castle Spray has been hinting at? from r/FortNiteBR

The Crazy Castle is already in the game as a spray, though a bigger role may be upcoming.

The spray appeared as a tier 2 reward for the Season 5 Battle Pass, launching speculation about when it could appear on the map.

A giant purple cube has appeared on the map and may be the catalyst for all of these map upcoming changes.

Be careful when approaching the cube as it can damage you, Ninja found out the hard way in the middle of a $500,000 tournament.

If you want to do some sleuthing yourself, the original video showing the potential changes is below.

Dance in the face of danger with the new Capoeira Emote.