The Fortnite community has been given a task by the Autumn Queen in hopes of unlocking a new animated Wrap but some players are starting to think that goal is unreachable.

There’s an animated weapon Wrap called Falling Leaf and it’s an excellent way to get into the fall spirit. Players have until December 1 to earn enough points as a community to unlock this wrap for everyone.

Epic Games set the goal at 2,500,000,000 which seems like an incredibly high number, but when you think about the number of Fortnite players around the world, it doesn’t seem as bad. 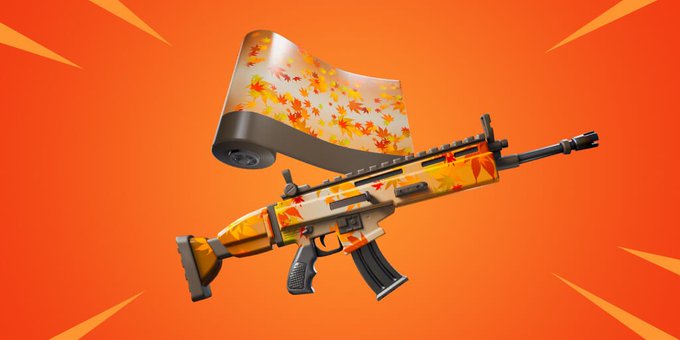 However, some are beginning to question if the quest is even possible as with just over two days to go, the community hasn’t even cracked the halfway point.

This doesn’t mean it’s impossible, but it goes to show that players may have underestimated the amount of time it takes to unlock this Wrap.

The progress with two days and six hours to go.

Players have taken their doubts to Reddit where many other players chimed in and shared similar doubts.

Reddit user Cactus1872 thought that the low total was due to the Thanksgiving holiday and players would be able to get back on track, but not everyone shared the same sentiment.

Some players questioned the timing of this quest, as it comes shortly after news the inaugural season of Chapter 2 would be extended until February. Many players have already completed every tier of their Battle Pass so perhaps this a ploy by Epic to get players to keep playing.

Is it even possible that we can earn this wrap? 2 days seems like a very short time to get 2.5 BILLION points, while we are sitting at less than a fifth of the way there. Hopefully this is because of Thanksgiving and now people will play more. Definitely going to be tough because people are working. from FortNiteBR

As it stands right now, the way to earn points revolves around healing teammates, but players aren’t rewarded with a whole lot of points for doing so, with the most points being rewarded for just playing with a friend.

There’s still a lot of time for players to get this Wrap unlocked so it’s definitely too early to give up all hope now, even if some already have. Even if the goal isn’t reached, it’s hard to imagine a world where Epic doesn’t extend the duration so everyone is able to get it.

Epic made this competition with the intention of giving away a free Wrap, so it stands to reason they might offer a boost. It might be time to worry when the contest starts winding down and players are nowhere near the goal.

There’s not actually a way to keep track of the quest in-game, so you’ll have to do so on a special website made just for it. You still have plenty of time to earn points so do your part for the community!