Data mining has revealed that Epic Games could be on the brink of releasing a host of new server for Fortnite Battle Royale.

Games files shared by FNBRLeaks and MystxcLeaks on Twitter a list of cities, states and countries under the heading “Beta” and, according to the data miners, they are “currently under development”.

Included in the list are the likes of London, Seoul, Paris, Belgium, the Netherlands, Singapore, Mumbai, Montreal and Ohio. When they will go live is currently unknown. 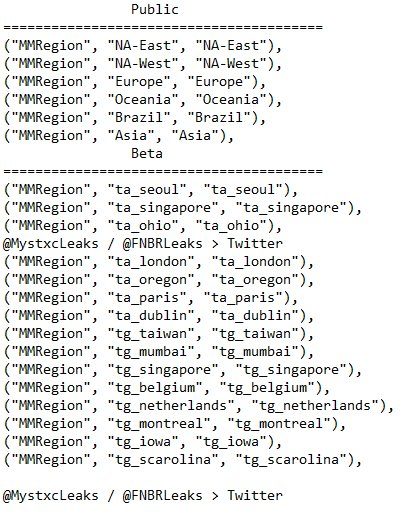 With Fortnite’s already massive player base growing by the day, the need for high quality servers and a high quantity of servers has never been bigger.

Luckily, Epic Games seems to well on the way to satiating that need and, if servers do indeed end up going live in all of these locations, improving the matchmaking experience for players all around the world.

Epic Games uses Amazon Web Services (AWS) for all of Fortnite’s online infrastructure and all servers run on the AWS cloud server, which is why events like Season 4’s rocket launch are able to happen successfully around the world at the same time.

The continued development of AWS and Fortnite’s servers in recent months seems to be allowing for the gradual expansion.

The new servers will reportedly be located in: