The first post was made by Ryan ‘Console-’ Modugno on the Team Fortress TV forums. Modugno holds a position as the head of North American coverage and has worked multiple events as a commentator and an observer.

The post is long and detailed, but a summary reads like this: According to Modugno, he and Pylyshyn were in a relationship that lasted seven months before they broke up. Behind the scenes both Pylyshyn and Modugno had been discounted from working on the Beyond The Summit TF2 event, while a quarter of the staff left, supposedly in relation to the allegations. This is supposedly what triggered the announcement of the event’s cancelation three days ago.

Modugno states that they first met after the cancelation of the Episode 3 LAN event when the team, who were due to be working, decided to use their now free time to head to Las Vegas for a weekend of partying.

“I’ve always been a pretty big partier, but rather timid about my body, personal space, and relationships, so when he was hitting on me and attempting to hold my hand, as an 18-year-old kid with a handful of relationships under my belt vs. this intimidating 31-year-old guy I was very freaked out,” the post reads.

“He has been my production role model since early iseries and was my inspiration for starting with TFTV and moving on to essentials, culminating in me getting to work on the same event he did years before, so I was really offput but [sic] him being attracted to me. He later apologized, but also asked if I was single. I lied and told him I was seeing someone to avoid any further interaction.”

When Modugno was then invited to work as an Overwatch observer at a collegiate event he says that Pylyshyn essentially invited himself too, offering to work for free and that it was in order to help teach some of his skills on the job in a game that was less familiar to Modugno. It was here that he alleged the sexual assault occurred. 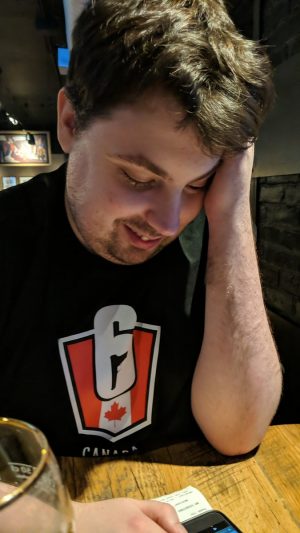 Modugno posted this image of Dashner on Twitter on October 24, calling him the “love of his life.”

“He had brought plenty of alcohol and insisted that I drink,” said Modugno. “Being the teenager that I am, being offered free alcohol from a friend/mentor seemed fine, especially since our call time was 3pm the next day. Ended up drinking way more than I should have, and just kinda crashed in my bed. The next thing I knew, Dashner was no longer in his own bed but in mine. Eventually things escalated to a point I was very uncomfortable with, which I told him. Despite this, things progressed and I was sexually assaulted.”

Not remembering the incident and continuing to work in close proximity, Modugno says they started dating each other at this point. He also adds that the memory of the incident had been repressed due to a combination of alcohol and trauma. The post wraps up by claiming that after details of the allegation became known to their staff, Beyond The Summit asked Modugno to stand down from the event.

“I was immediately asked to step down, as to not attract negative attention to the event,” he wrote. “Apparently BTS were basically hemorrhaging money to put this on for us, so any potential PR nightmare from this situation could have killed the event. Dashner, shortly after hearing about all of this, fled the TF2 scene entirely. He asked enigma to delete his TFTV profile and change his name to a random alphanumeric string, left all TF2 related discords, and privated his twitter account out of fear for his esports career.”

Modugno also later edited the post to say that he had contacted the police in regards to this matter but had been advised that due to the nature of the incident having no witnesses or evidence and with Pylyshyn being a Canadian resident there was little that could be done.

Shortly after the post, another was made by the co-director of the popular Ready Up: Competitive Team Fortress 2 documentary, Ness ‘uberchain’ Delacroix. In her post she alleges that she was also sexually assaulted by Pylyshyn during their relationship.

“I dated Dashner and tried to stick it out with him, only realized our relationship was not normal after I left him,” she stated. “He treated me like shit including manipulation/sexual coercion/rape under stealthing/verbal abuse/emotional abuse/gaslighting/lovebombing, I thought I needed to keep quiet about it for TF2 LANs to keep going, and I didn’t name drop him because I thought I needed to protect the safety of my friends and family. I told people who knew to stay quiet about it for the same reasons.”

Delacroix adds that after having read Modugno’s post she felt compelled to tell her story, too, in an act of solidarity, adding that the secrecy from both parties was down to fear of industry reprisals.

“Now he’s gone and done these shit things again to Console, who was afraid to speak up because he didn’t want to jeopardize TF2 and was afraid of Dashner,” the post reads. “I made a mistake, many of us in the TF2 scene made a mistake, and we not only need to call out Dashner, but we need to stop prioritizing TF2 over hiding these terrible people because we were wrong; this hurts the community more than it helps it. Dashner is sick in the head and needs help, and hopefully he can become a better person but for now, he needs to stay away from this scene.”

In addition to this post, Delacroix had mentioned the incidents without naming anyone in a tweet published in August 2018.

And now I'm ready to talk about it, so here's a non-specific list of what people did or said to me.

Do I think anything will change? I don't know. I thought they were more important over me to the scene I love and defend to this day, so I stayed quiet then.

It has proven impossible to reach Pylyshyn for comment due to the fact that he has apparently deleted all of his social media accounts, including his Twitter and Reddit accounts he would post from.

Additionally, his entire post history has been wiped from the popular Team Liquid forums along with all but one post from the 978 posts he had made on the Team Fortress TV forums. He has also changed or deleted his Steam account ID. 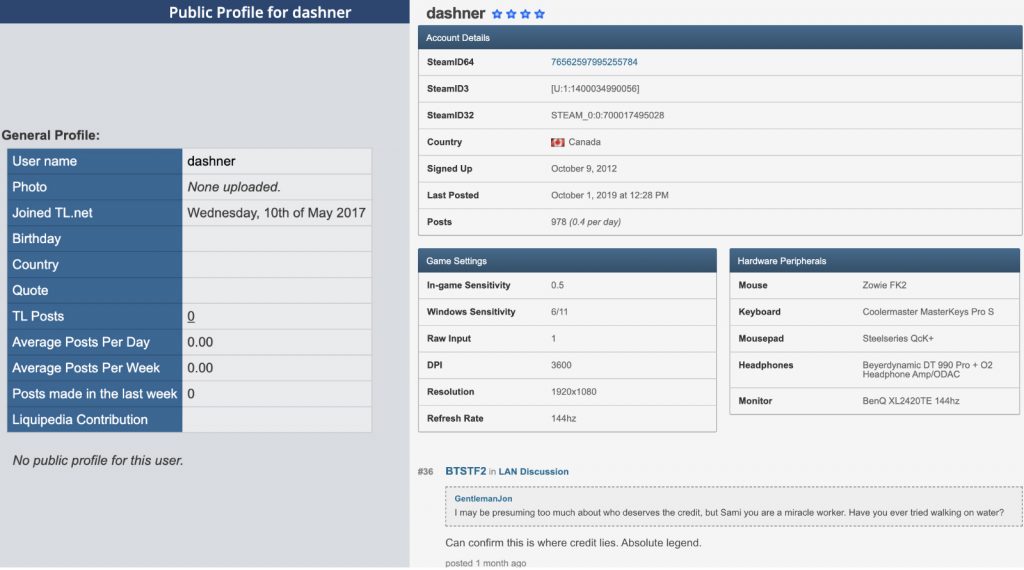 Dashner’s profiles on both the Team Liquid forum and the TF2 forums have been wiped, save for one post.

Beyond The Summit have denied that they asked Modugno to stand down from the event, claiming that the first they heard of the allegations was when he posted on Team Fortress TV.

“We definitely did not investigate any allegations and did not ask anyone to stand down,” they told Dexerto. “We found out about all that stuff essentially the same time as the public. We were only in communication with the group that was running the event and never instructed them to ban or ask anyone to step down. We were as surprised as anyone when everything came out and basically relied on the words of the group that initially pitched the event to us.”