YouTuber and Twitch streamer Daniel Desmond ‘Etika’ Amofah finds himself in hot water after ranting on Twitter about hating Jews, which led him being arrested and put into an ambulance all while streaming.

Etika has been a master of controversy so far in 2019 and has drummed up some more after going on a rant that led to him getting dragged through the dirt by other Twitter users and even put into police custody.

It started after he messaged many prominent YouTubers and personalities asking for verification on Twitter. Obviously, this isn’t something they would have control over and once they turned him down, Etika went on an explosive Twitter rant.

Police showed up and arrested him

It’s unclear how things escalated to the police arriving but during his Instagram Live broadcast, police entered his home and put him in handcuffs.

And there goes Etika pic.twitter.com/ebzGmgE7tZ

We can see Etika being taken to an ambulance in handcuffs, indicating he might be heading there first, likely due to the way he was acting on Twitter and to the police.

#Etika Part 2 of live stream! Comment your thoughts on this?? Does he need help :neutral_face: pic.twitter.com/7sTjCG5dUA

At one point during his rant, Etika posted a video of the NYPD, shortly before being detained, outside of his window as he explained people on the internet were trying to hurt him.

What did Etika say?

There’s a lot to dig into with these tweets but the one that really kicked things off was him tweeting about hating Jews. This anti-semetic tweet didn’t sit well with Twitter users as he was dragged by fans.

Of course, this isn’t Etika’s first rodeo and he had a lot more to say in his long tirade.

Etika kept it going by insulting the entire human race, religion and basically threatening to cleanse the population in full Thanos style.

There’s a lot more to pick and choose from, but the lengthy rant has drawn the ire of plenty and has caused Etika to trend on Twitter all throughout the day on April 29.

If you were unaware of who Etika was before all this, you might have a lot of catching up to do. 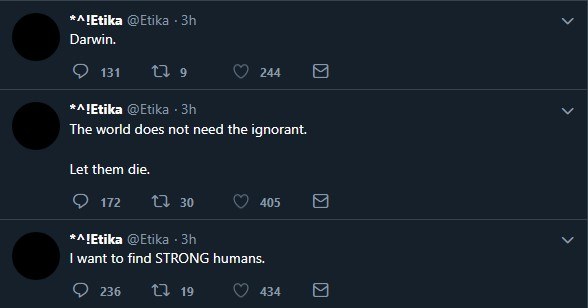 Etika wants to cleanse the earth of the ignorant.

Many of his followers on Twitter have become aware of his antics and have since become immune to what he has to say. Here’s just a look at some of the reactions from people on Twitter.

It’s hard to say why this rant is really going on but it looks like Twitter is definitely ready for it.

Etika has a murky history

Etika has become known for his reaction videos in the Super Smash Bros. community but has since strayed away from that into whatever it is that he has going on now.

On April 16, Etika posted to Twitter suggesting he was going to kill himself which led to many of his fans becoming concerned about his health and well-being.

Nothing came out of the incident and some fans even suggested he did all of this for attention. His history runs so deep that he even has his own KnowYourMeme entry.

In 2018 the streamer was banned from Twitch after using a homophobic slur on his stream, according to Newsweek.

It remains to be seen if any action will be taken against his Twitter account after this latest rant.