At the end of his Twitch stream on Aug 13, Overwatch pro Félix ‘xQc’ Lengyel was about to log off when his Minecraft house suffered an unfortunate fate that left him speechless.

Minecraft is seeing a huge resurgence due to popular personalities like Felix ‘PewDiePie‘ Kjellberg playing it. And now Overwatch pro xQc has tried his hand at building his own base in the game.

During the end of a lengthy stream on August 13, the Canadian streamer was ready to go to bed after putting in a huge amount of effort to build his house, only to see his hard work go to waste in seconds.

The popular Twitch streamer had spent hours working on his base, making what he thought was a stylish design. Although he seemed to be tempting fate, as he purposely built his house near lava as he thought it looked cool.

“It’s gonna catch on fuckin’ fire dude. My entire house is about to fuckin’ burn down” he prophetically said. Despite knowing the risks, the pro continued to spend hours meticulously designing the roof and construction of his house. He was even playing in the game’s ‘hardcore mode’, which has no respawn.

Satisfied with his build, the popular streamer had just completed the finishing touches on his house when he decided to call it a night. Clearly exhausted, he said “Time to go to bed, chat. I didn’t know I would go full…” he paused, before realizing something was horribly wrong.

The wooden slabs he used to build the outside of his base suddenly caught fire, as the lava near his base torched it. In absolute shock and disbelief, he tried to replace the blocks with more wood, only to see them quickly disintegrate as well. 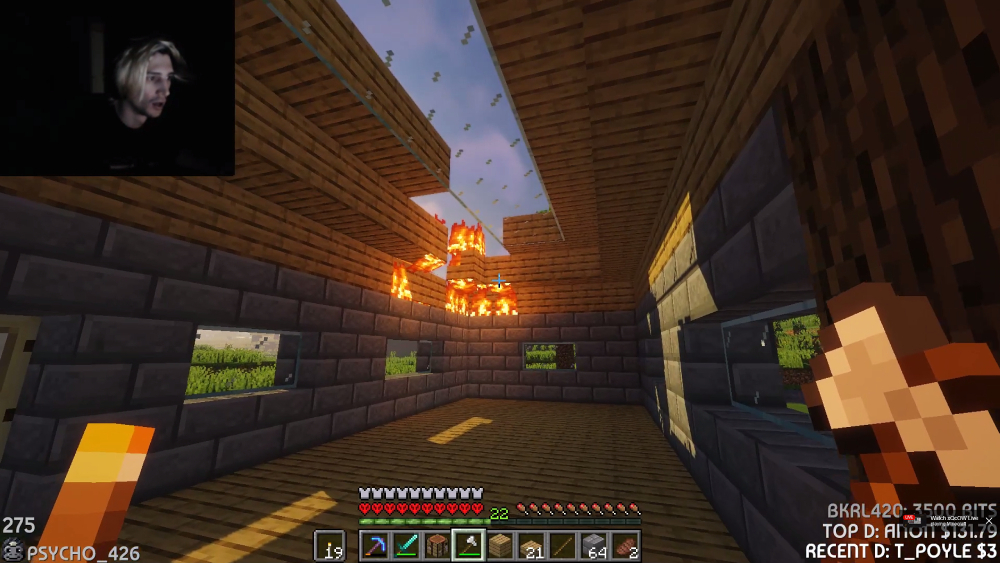 All that hard work up in flames.
[ad name=”article4″]

xQc quickly realized that nothing could fix the situation, as all the wood on his base had gone up in flames. “Done!” he said, slamming his fist on the desk in defeat. The Canadian streamer was left deflated after having spent hours meticulously designing his house.

A donation in the chat then added salt to the wound by pointing out the obvious. “That lava is going to burn your base down,” it said to which the Overwatch pro replied “No shit!”

xQc is one of the most popular streamers on Twitch, with almost 1.4m followers as of August 14.