Popular Overwatch pro Felix ‘xQc’ Lengyel got his fans in an uproar after showing off his disgusting streaming setup – but his audience wasn’t pleased with his efforts to clean up the mess, either.

xQc went live on May 5 in a response to fan outrage over the state of his setup, determined to clean up the clutter as a show of responsibility to his fans – which ended up backfiring in a hilarious way.

The streamer seemed to make a show of just how disgusting his room was, showing off a pile of trash strewn about the floor and even an entire pizza that had become “rotten,” with just a single slice missing from out of the box.

That’s not all; xQc’s effort to wash his desk ended in hilarity, as he was determined to use an abundance of dish soap to clean its wood surface – causing some members of his chat to lose their minds over potential damage to the furniture.

“Dish soap, dude, it’s all I have, literally,” xQc claimed as he squirted a huge amount of soap onto the desk.

That wasn’t the end of his incredulous cleaning efforts; xQc didn’t even dilute the soap with water, simply using a ream of paper towels to mop up the soap while his chat warned that his desk would become “WAY TOO STICKY” without being properly washed.

Fans were left stunned by the state of xQc’s room during his initial room tour on May 3, where he showed off his crumb-ridden keyboard and a slew of empty soda cans, explaining that the mess had come about due to the prolonged absence of his mother.

Of course, xQc wouldn’t be the only Twitch streamer called out for the miserable state of their setup, either; popular streamer Tyler1 was similarly targeted for his own slovenliness, after his girlfriend showed off his setup in a secret livestream on April 15.

Popular World of Warcraft streamer Asmongold is even known for his dirty setup, a photo of which showed a horde of empty cups set to the side of his montor, coupled with a mountain of trash strewn about the floor. 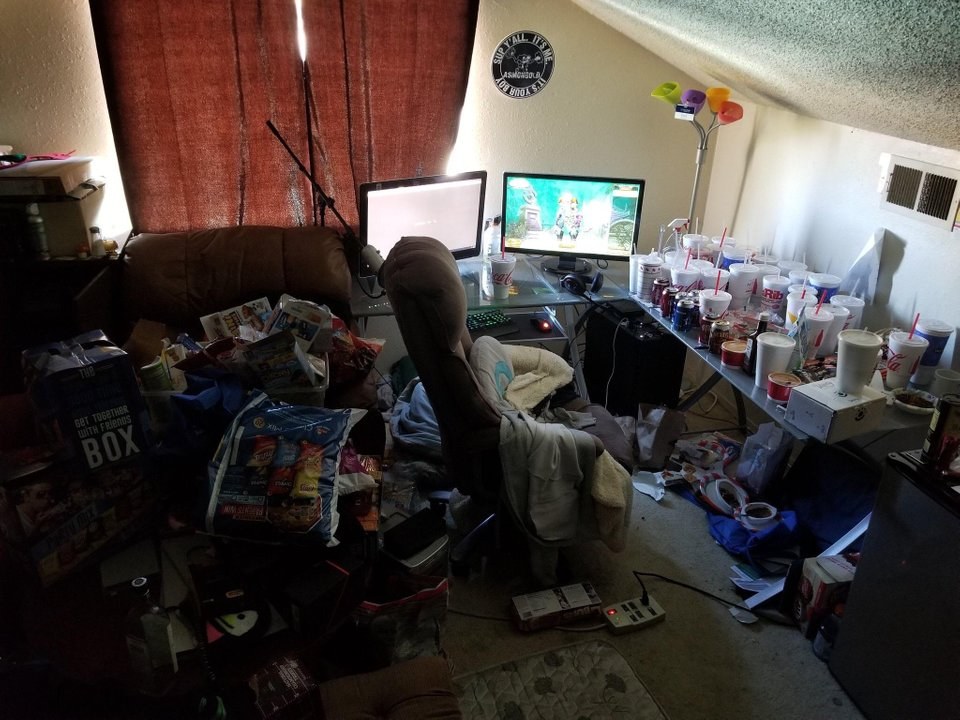 Popular WoW streamer Asmongold is known throughout the internet for his less than savory cleaning habits, as evidenced by this photo taken of his streaming room.
https://www.reddit.com/r/trashy/comments/94ta7b/streaming_setup_from_asmongold_known_wow_streamer/

No matter how important getting in that next game might be, it’s always worth cleaning your streaming room – lest it ends up getting secretly exposed, as in Tyler1’s case.