Logan Paul has revealed his ambitions of taking MMA seriously, even fighting in the UFC, and lightweight fighter Michael Chiesa has suggested a possible debut opponent – although not who you might expect.

Following his draw with fellow YouTuber KSI in the much anticipated boxing match on August 25, Logan made it clear that his fighting ambitions were only just getting started.

A former wrestler, he actually initially wanted to fight KSI in an MMA bout, but KSI refused, so Logan is now turning his attention to the UFC.

Fights with amateurs have been put on by the UFC before, provided they are big enough names to attract pay-per-view purchases, and Logan Paul certainly ticks that box, thanks to his massive YouTube following.

Michael Chiesa, who fights in the UFC’s lightweight division saw Logan’s announcement that he wanted to take on the MMA world, and made a surprising suggestion about who is debut opponent should be.

Chiesa reckons that top female fighter Cris Cyborg would be a suitable opponent for the YouTube star. 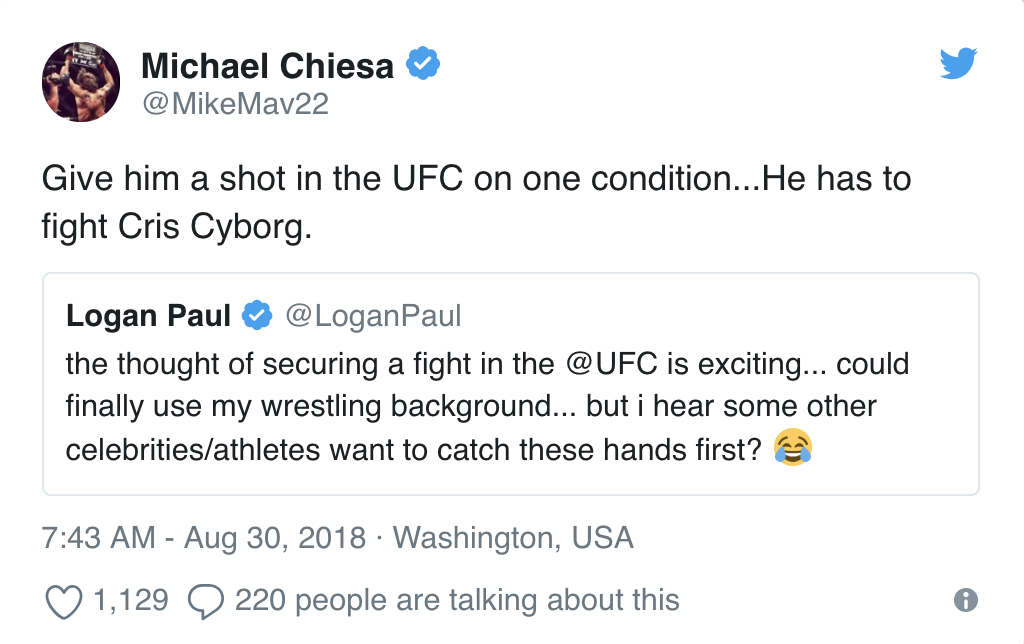 Whether a male vs female bout would actually be allowed is another matter of course, and it is unlikely that the UFC would approve of it.

But given the massive attention and hype that the KSI vs Logan Paul fight managed to drum up, the UFC will no doubt be at the very least considering the possibility of having Paul make his debut, even for the PPV sales alone.