h2_gucio has been unbanned on Twitch as of August 28.

During a Twitch broadcast on August 26, Polish streamer ‘h2_gucio’ was browsing Wikipedia to look up a medical term when he was suddenly banned from the platform.

Twitch has had its fair share of controversies in 2019, that has left many feeling like the streaming platform has been unfair in how it enforces its rules and issues bans.

On August 26, a Polish streamer by the name of ‘h2_gucio’ was browsing Wikipedia during his broadcast, and was banned almost instantly after a medical photo popped up – though it isn’t confirmed to be the reason why.

Banned after looking at Wikipedia

The Polish streamer was reacting to infomercials for his audience when he came across one that mentioned baby powder. Seeing as English isn’t his first language, he didn’t understand what it was so he turned to Google for the answers.

Upon reaching the Wikipedia page for the baby powder, the streamer looked at the definition which explained that it is used to prevent diaper rash. The term was hyperlinked to another page, so wondering what that was, he clicked it. 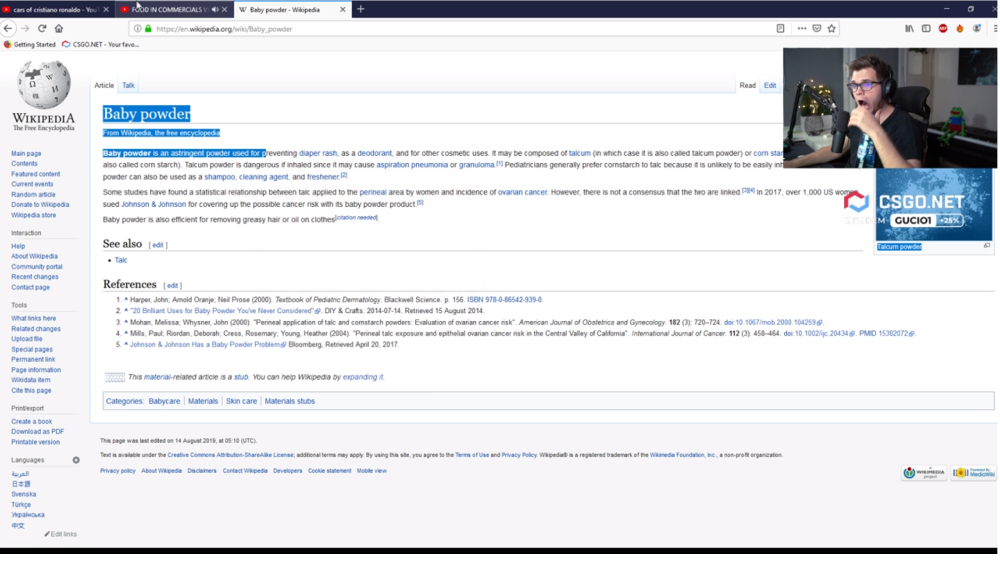 After clicking the link, a medical photo of a baby’s bottom popped up,which showed what diaper rash looks like in real life. The photo startled the streamer who did not expect such a brash image.

The photo was only shown on stream for less than a second as h2_gucio screamed and immediately closed out of the page as quickly as possible, looking visibly surprised by what was shown. Shortly after, his channel was banned by Twitch.

This isn’t confirmed as the reason why, but the photo could have been seen as a violation of Community Guidelines.

Not the first time Twitch has taken issue with medical ‘nudity’

Twitch has clashed with users over medical ‘nudity’ before. On July 24 Twitch partner ‘HeatheredEffect’ breastfed her baby on stream, and the clip was removed after having over 20k views.

The streamer called out the platform, who later reversed the decision, and stated that they would now allow breastfeeding on broadcasts.

WE DID IT!:breast_feeding::skin-tone-2:@Twitch just confirmed what we were saying all along—breastfeeding is NOT sexual & it is NOT against ToS.

Moral of the story: Never back down for the things you believe in regardless of the backlash you receive. You can make a difference!#normalizebreastfeeding pic.twitter.com/MvvbiZgwjo

Although it’s unclear how long the ban will be for, breaking Community Guidelines can result in suspensions ranging from 24 hours up to 30 days. We have reached out to Twitch for further comment.