The Verge under fire for alleged censorship of critical YouTube channels

Popular tech, news and media outlet the Verge, operated by Vox media, has come under fire for issuing copyright strikes against YouTube videos critical of their content.

Although the video was removed by Vox Media due to the alleged infringement, it has since been reinstated, following a counter-claim initiated by Kyle on February 13.

Welp, @voxdotcom just removed the "Lyle Reacts to the Verge's PC Build Video" claiming copyright violation and @YouTube, without warning, felt that was deserving of a strike against the channel. Watch out @ScienceStudioYT @TechYESCity @KristoferYee pic.twitter.com/jH5pW7rXDO

YouTuber ReviewTechUSA likewise saw a claim against his video critical of the Verge’s PC building skills, and claimed that the Verge had issued their strike in response to his criticism – not due to copyright infringement.

The Verge’s Editor-in-Chief, Nilay Patel, released a statement concerning the issue on February 15, in which he claimed that two videos out of a series of flagged content had been pulled from YouTube by the Verge’s legal team.

The team issued these strikes against the videos for featuring a “racist caricature” (likely in reference to BitWitKyle’s video) and using “90%” of their footage without “transformative use.”

Patel went on to admit that he had personally filed for the retraction of the strikes in question after being notified of the issue, and expressed disappointment in users’ reaction to the problem – even showing a possible death threat directed at The Verge’s staff. 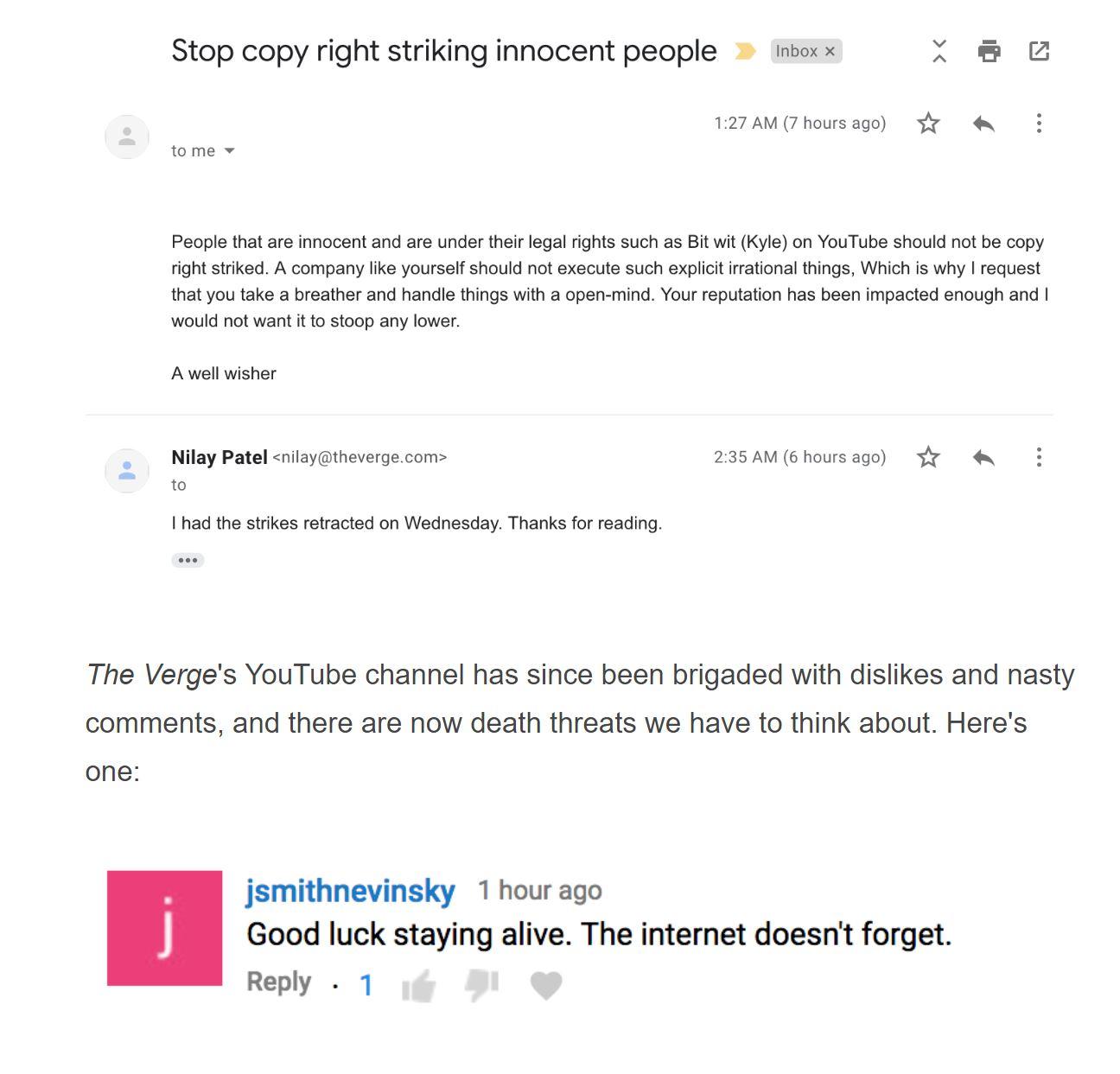 The Verge has since been hit with a slew of criticism following their strikes against YouTube channels critical of their videos, with some even hinting at possible death threats.
https://www.theverge.com/2019/2/15/18226105/a-note-about-youtube-copyright-strikes-from-vox-media

While Kyle’s video is now reinstated, he feels that YouTube’s copyright claim system needs work, in order to avoid such pitfalls in the future.

This a popular sentiment echoed throughout the platform, with even major YouTubers seeing mass demonetization for merely mentioning song titles.