Tfue and Ninja surpassed as most followed Twitch channels in December

Twitch’s most followed streamers for the month of December aren’t Ninja or Tfue, but a banned Russian casino account.

The Fortnite streamers are usually right at the top of the Twitch rankings, but they have fallen well behind the account, called Slot_V, in the follower growth standings for December.

Ninja and Tfue have been active on Twitch for years, but the amazing thing is that Slot_V hasn’t had to put the hours in to replace them at the top. It has only streamed once in December, yet it has managed to amass over 431,000 new followers.

Ninja has become the face of Twitch and Fortnite in recent months.
[ad name=”article2″]

Slot_V took off at the end of November, gaining over 300,000 followers between November 27 and December 1. However, the Russian account may not be top for too long as the account has been deleted, haemorrhaging 215,000 followers on December 2, a day after its first and only stream of the month.

However, it could still be a tall order for Tfue and Ninja to return to the top this month as the pair are currently 100,000 new followers behind Slot_V. 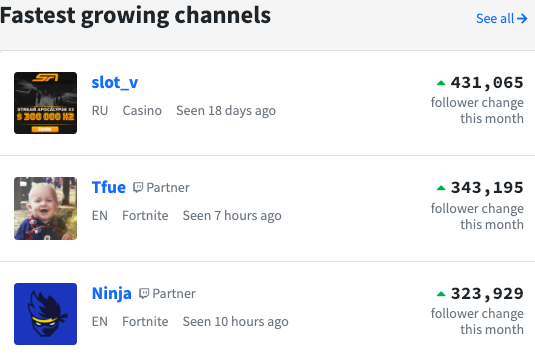 The pair sit second and third in the rankings for December.
[ad name=”article3″]

With the huge growth and lack of content, it’s likely that the Slot_V account was botting fake followers in order to gain some traction for their gambling website. The account had streamed a number of times in the past, but only to a small number of viewers.

Even when it had amassed over 435,000 total followers, the account was still only able to attract just over 3,000 viewers to their stream, which only lasted for around 40 minutes.

However, with the account now being deleted, it shouldn’t be too long before their metrics are taken away, handing the chance back to the Fortnite streamers to reclaim top spot.