Study claims PewDiePie outearns every other YouTuber by ‘millions’

A study published on August 6 that collected data of merchandise sales and YouTube views claims that Felix ‘PewDiePie’ Kjellberg makes millions above any other creator on video-hosting platform.

The last year has been very good for PewDiePie. With the infamous T-Series vs PewDiePie feud becoming a cultural phenomenon, the Swede had a surge in views and subscribers pushing him closer to the 100 million subscriber milestone.

On the August 2 episode of the ‘h3 Podcast’ he blew the hosts’ minds with his crazy monthly views and subscriber count. Now, a new study suggests that those numbers might be even more insane than first thought, according to PR Week.

The study was conducted by a company called Purple Moon Promo who used a tool designed by Sellfy. According to the company, they look at the average views of other YouTubers, and then take the average cost of the merchandise they sell on their site.

Using their viewership numbers, they calculate the likely amount of people that would buy their products. Given how popular PewDiePie’s merchandise is, it’s easy to see the potential for sales. According to them, they estimate PewDiePie makes close to $7 million alone in merchandise sales. 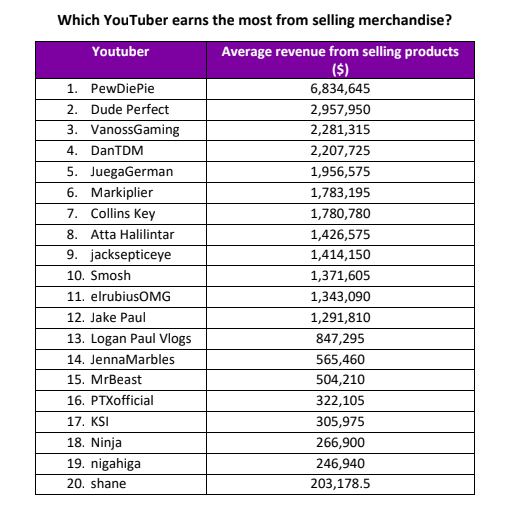 The study also looked at all the views of the top creators on YouTube, and calculated what their CPM (cost per impression) could be based on their total views. While the exact number is only known to the creator, the company estimated that he makes over $1.1 million dollars a month on adverts alone.

The study also listed the other top earners according to their data. And interesting enough, the YouTube superstar earns a staggering amount more, with the second highest earner on their list being stunt-group “Dude Perfect” who make close to $3 million in merchandise and $500,000 a month in ads. 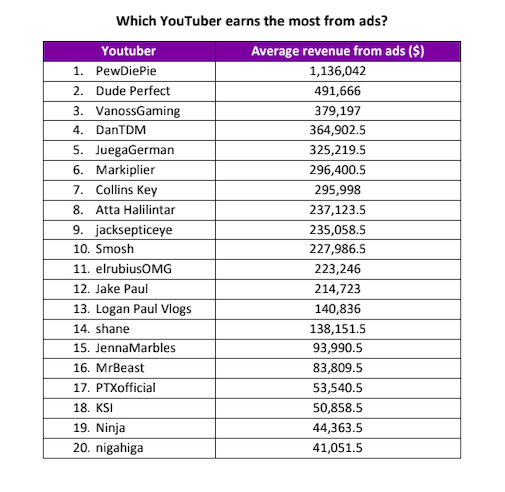 The numbers are calculated

It should be said, that no one knows what the numbers exactly are. There is a lot of guesswork and other factors to consider. Not to mention that according to Forbes last year, PewDiePie made $15.5 million total.

If this study is accurate, the Swedish YouTuber would have had a dramatic increase in revenue. But it also would line up with his sharp increase in subscribers and views in the past year.

During the ‘h3 podcast’, Ethan Kelin and Hila Klein actually debated what he made in CPM after being shocked that he gets over 544 million views a month. While Hila was quick to caution guessing a number, Ethan said he felt “confident” that he was getting $3 a CPM.

“Trust me. He makes between 2 and 3 CPM with the amount of mid-rolls. It’s not 1” he stated before guessing Pewds makes “1.8 million a month.”

Regardless of what the actual numbers are, there is no doubt that his views and subscriber counts is absolutely insane.