PewDiePie's next Minecraft plan could be his best yet - Dexerto
Entertainment

PewDiePie’s next Minecraft plan could be his best yet

During Felix ‘PewDiePie’ Kjellberg’s September 13 video, the YouTube king considered his future plans for his series after he reacted to mods and creations from the Minecraft subreddit.

PewDiePie reached the ‘end’ of vanilla Minecraft after taking down the Ender Dragon and reaching the very bottom level of the sandbox title on August 25, which has left some wondering what comes next.

Fans got a glimpse of what the potential future could be for the Swede’s popular gaming series when in his latest video he reacted to mods and fan creations which left him considering some potential ideas.

During the video, the YouTube king showed his audience mods created by infamous modder ‘McMakistein’, who made houses that can walk on legs and even fly across the map. This left the Swede considering the future for his Minecraft series.

“See, a lot of people have been telling me I should start using mods in Minecraft now. Like, modded survival is now a thing, to kind of keep it fresh for you. And you can do this kind of stuff,” the YouTube star said, showing off the mod.

Later on in the video, Pewds discovered that bees would be coming to Minecraft in a future update, and debated whether he should wait for the official release, or cheat to spawn them instead.

“There’s bees in Minecraft!? I don’t know, am I allowed to play the new one? Because I don’t think you can spawn them without cheating. Or should I just wait for the actual update. I think I should just wait.” he said.

The YouTuber quickly changed his mind upon seeing a player-created data pack which lets people put a saddle on bees and ride them. “Oh my God, okay, I’m getting the bees” he said in excitement. 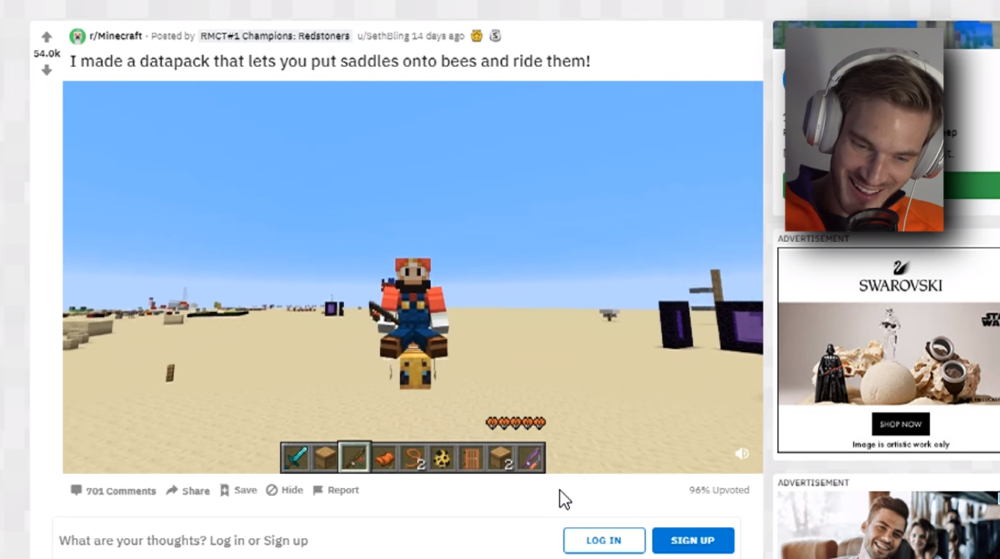 An example of how fans can alter the game to make it unique and fun.

PewDiePie has used Minecraft mods before

While the YouTube king is considering a fully-modded Survival mode in the future, he actually used a data pack created by the popular modder previously in his August 7 video, where he faced off against himself in an epic boss fight.

After the Swede battled with his clone who attacked him with floating explosive bro fists, he was rewarded with his infamous PC gaming chair as a mount, and headphones that played his own song ‘Bitch Lasagna’ in game, giving fans a taste of how insane his future Minecraft episodes could be with actual mods.

As of the time of this article, PewDiePie has over 101 million subscribers, making him the most subbed individual content creator on the platform.

He reached the major milestone on August 25, and was rewarded with a ‘Red Diamond’ Play Button from YouTube itself.