YouTube king Felix ‘PewDiePie’ Kjellberg might be the biggest creator on the platform, but one petition is seeking to ban him from the site – and he’s not pleased with the movement.

Kjellberg spoke out on the petition in a ‘Pew News’ segment on April 7, where he decried the article’s “defamatory” claims and noted that several of its allegations were completely baseless.

“It’s so blatantly misrepresenting and misinforming people,” PewDiePie said of the petition. “A lot of these points are just flat-out lies, as well. …it’s surprising how Change.org is even letting this be up, because there’s nothing to back up any of the claims.”

The YouTuber went on to note that the petitioner had claimed that, even if he were to “clean up his act,” his comment section would still be a “cesspool of white supremacist activities” – an argument that PewDiePie called “meek,” “weasely,” and “tiring.”

A Change.org petition asking to ban PewDiePie from YouTube has gained over 76,000 signatures as of April 7 – but critics are asking that the petition be removed from the website.
[ad name=”article3″]

Hitting back at Wil Wheaton

Of course, signers of the Change.org petition aren’t the only group firing shots at PewDiePie; actor Wil Wheaton likewise published a scathing post about the YouTuber via Facebook, where he called Kjellberg a “racist, piece of shit bigot.”

“This is such a strawman argument,” PewDiePie said of Wil’s post. “…this implies that all my content is just filled with racial jokes and slurs.” 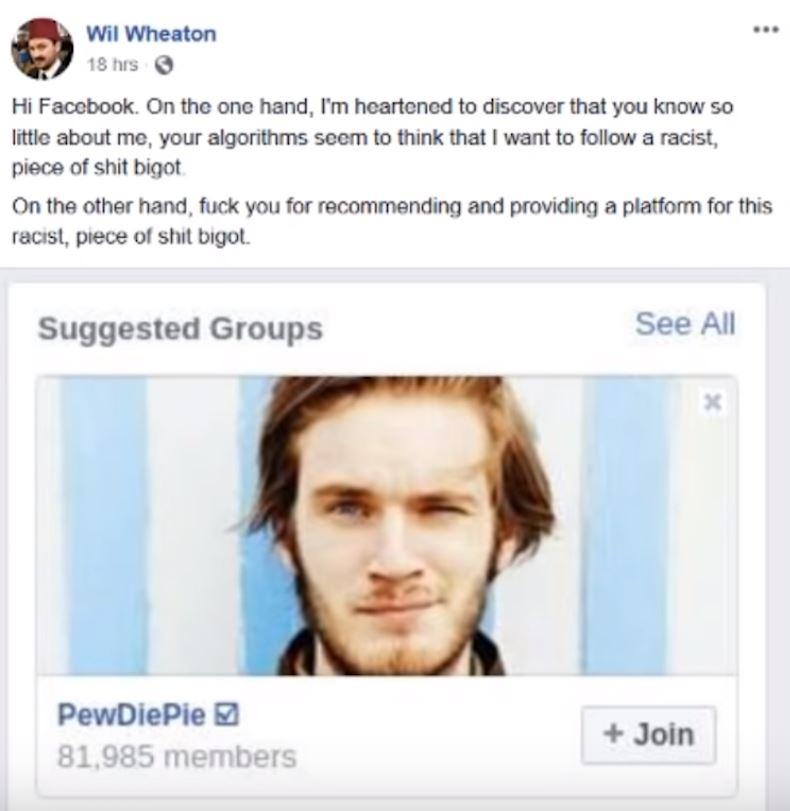 Although Kjellberg felt that doing so was “self-gratifying,” he went on to recount the number of charity drives he’s held in the past as a means of self-defense, noting that and his fanbase had raised hundreds of thousands of dollars to multiple charities.

“No, doing charity work does no absolve your shortcomings – that’s not what anyone is saying,” PewDiePie explained. “….constantly having all these negative things listed without acknowledging any of the positives is gonna paint a bad picture of anyone.”

Despite these attacks, PewDiePie continues to see success on YouTube, reaching a record-breaking 93 million subscribers ahead of Bollywood label T-Series after releasing his ‘Congratulations’ diss track in late March.