One of the hottest topics right now in the online gaming community is that of star Twitch streamer Tyler ‘Ninja’ Blevins stating that he will not be live-streaming and playing with female gamers on his channel.

After publicly discussing his decision on August 11, the popular streamer has released another statement further clarifying his position.

Ninja public comments about not wanting to stream with women turned out to be polarizing and inspired heavy debate across social media.

While some attacked him and accused him of being in the wrong, many defended his right to make his own choices, and even praised him for protecting his relationship with his wife and manager Jessica ‘JGhosty’ Blevins.

On August 13, Ninja posted another statement on his Twitter page, addressing the widespread debate about his deliberate decision.

I wanted to take a moment to address the discussion around the article that came out over the weekend. While I understand some people have implied my views [to] mean I have something against playing with women, I want to make clear the isse I’m addressing is online harassment, and my attempt to minimize it from our life. It is something that affects all streamers, especially ones that make their relationships public. I wanted to bring attention to this issue and my comments should not be characterized as anything beyond that.
Having just celebrated my one year anniversayr, my wife and my family will always be the most important thing to me and I am doing my best to protect them.
We are fans of all kind of streamers – curvyllama, kuliatv, and halieatisuto are a few of our favorites and we encourage others to check out their channels. I look forward to the opportunity to meet and play with all kinds of Fortnite players in future tournament and event. 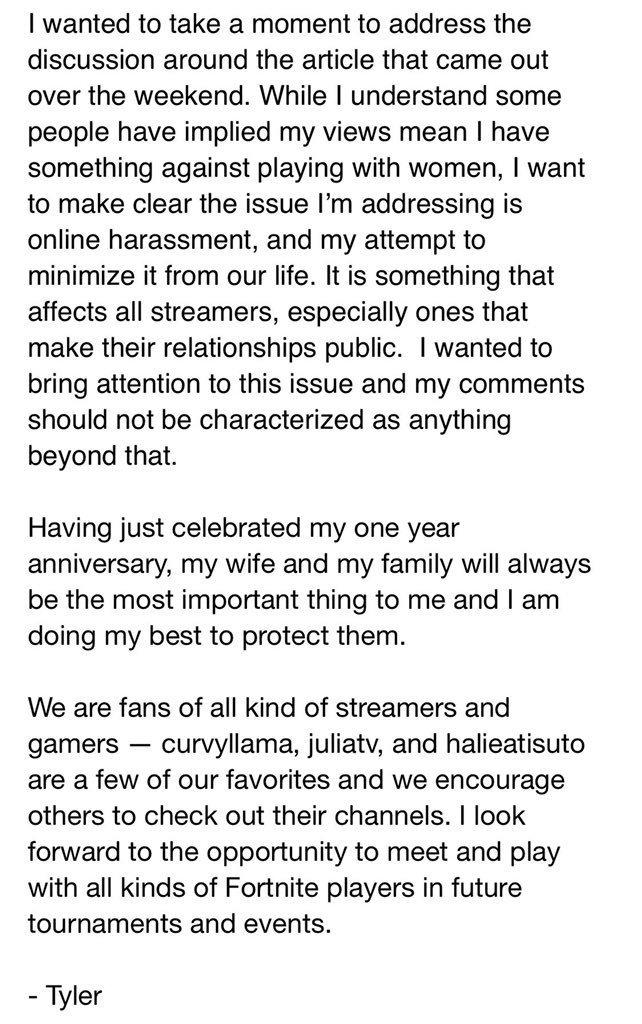 Being the biggest and most well-known streamer and online gamer in the world, every single one of Ninja’s words and actions are likely to fall under the scrutiny of the masses.

Therefore, whether you agree with his decision or not, it is clear that he is prioritizing his relationship with his wife and does not want his family to be bothered by online harassment.