Ninja freaks out after spotting strange lights while stargazing

On April 26, popular streamer Tyler ‘Ninja’ Blevins posted on Twitter about a strange encounter he had while stargazing with his wife. The Mixer star’s video went viral as he asked his followers what it could be.

Ninja is one of most popular streamers in the world, boasting millions of followers to his channel. The personality made a major move in 2019 when he left Twitch and signed exclusively to Microsoft’s platform.

However, the Mixer star made waves on on social media when he uploaded a video about flashing lights in the sky. The UFO-like encounter had a pretty simple explanation though after his followers solved the mystery.

The streamer tweeted out “What the hell did I just see” on the night of April 26. The post included a video where he explained to his fans that he had been stargazing with his wife when something bizarre interrupted the experience.

“I freaking s**t you not. What I thought was the North star, it starts flashing. And like forty dots, they all look like little mini stars just start shooting out of it. And falling in a perfect straight line across the sky,” he exclaimed.

The Fortnite star tried to capture footage of the event, but his camera had failed him. “I tried to get a video. Couldn’t record s**t. My phone wouldn’t pick it up. What the hell is this? What just happened?!”

What the hell did I just see pic.twitter.com/WEvjBaPNTJ

After many fans replied trying to figure out what it was, Ninja uploaded a single photo to his social media to give viewers a glimpse at the phenomena he and his wife had witnessed.

The Mixer star uploaded a photo of the strange lights in the sky.

The mystery, however, seemed to be solved when friend and fellow streamer Benjamin ‘DrLupo’ Lupo suggested that it was a satellite by SpaceX that he had seen. YouTuber Jacksepticye confirmed it, linking a video to the Starlink project – which matched up with Ninja’s photo. 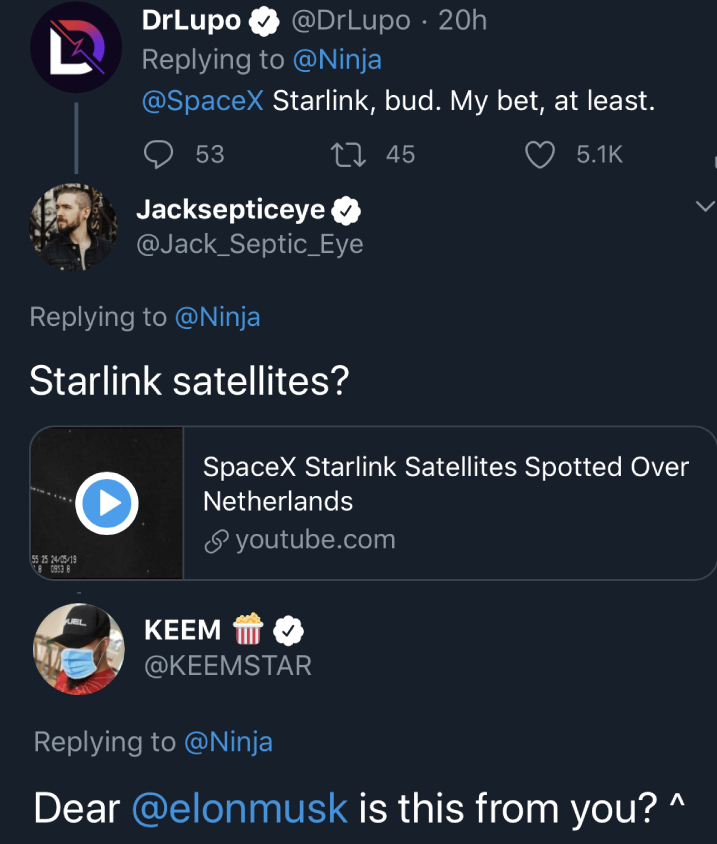 The Starlink project was first launched into orbit in March 2018, and was helmed by Elon Musk’s company SpaceX. The project consists of thousands of small satellites which provide internet access. However, seeing the line of dots in the sky can be jarring for the first time.

The Mixer star had not made any further comments on the experience until a day later on April 27 when he tweeted out ‘Aliens’ alongside an extraterrestrial emoji.

Bizarrely, the post coincided with ‘UFO’ – Unidentified Flying Objects’ trending on Twitter at the same time. The term exploded on social media after the Pentagon allegedly released video evidence of them.

The streamer joked about the timing when a follower replied, “After what you saw last night, they had to confirm.” Ninja exclaimed, “The TIMING though.”

A day later Ninja joked about the timing when UFO began to trend on Twitter.

While the answer to Ninja’s stargazing mystery was none other then Elon Musk’s satellite, it’s hard to deny the hilariously coincidental timing of UFOs trending on social media the following day.

Extraterrestrials aside, the Fortnite star continues to crush it on Mixer with an insane amount of followers. The streamer has also amassed millions of followers across YouTube and Twitter.