NICKMERCS took to Twitter to celebrate the fact that his YouTube channel crossed the 1 million subscriber mark on Sunday, September 16, and to thank his fans and his team for support.

In the tweet, NICKMERCS spoke about the hard work he put into his channel, saying “It’s been a grind” and that he spent a “lot of hours” on “the creative side of things”. 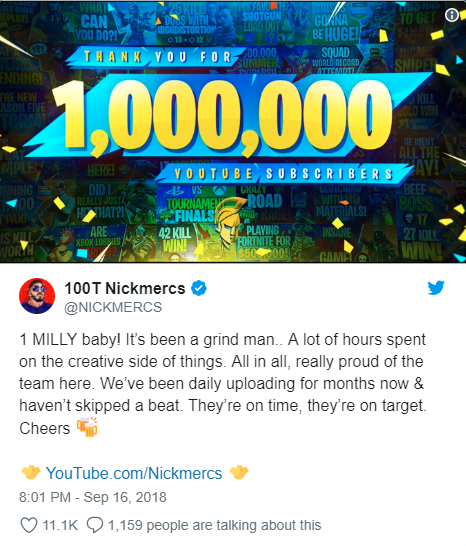 Kolcheff also thanked his editor Gingee and designers for their hard work, saying; “All in all, really proud of the team here. We’ve been daily uploading for months now & haven’t skipped a beat. They’re on time, they’re on target.”

But the massive milestone on YouTube isn’t the only accomplishment NICKMERCS has achieved recently. His Twitch channel has now officially crossed 1.5 million followers, making him one of the biggest stars on the streaming platform.

NICKMERCS has seen massive success on both his YouTube and Twitch channels since switching to the incredibly popular Fortnite Battle Royale. His in-game ability and outgoing personality has garnered him plenty of fans, and the fact that he uses a controller to play against other top Fortnite players has made him stand out.

Kolcheff competes in various Fortnite esports competitions using his controller, and consistently places highly. He finished in 17th position at the recent Summer Skirmish finals at PAX West, earning $11,250 in the process.

Kolcheff is likely to compete in Fortnite’s Fall Skirmish beginning on Friday, October 21, and is sure to garner even more fans as the competition goes on.