Australian Twitch streamer lara6683 turned up the heat during a broadcast where she covered the iconic trance track Sandstorm by Darude.

While taking donations and song request as part of her November 4 stream, Lara, had just finished covering Legend of Wind by Nausicaa when viewer and fellow streamer czech_meowt asked her to play Sandstorm.

The old-school video game enthusiast had to quickly listen to the track to re-familiarize herself with the 1999 hit. 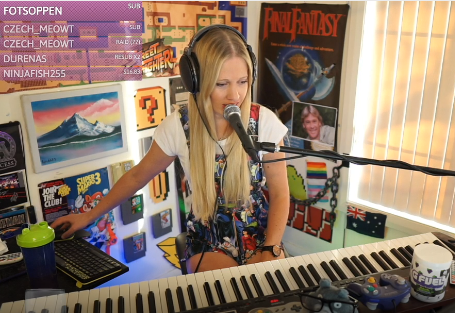 Lara blew her viewers away with an amazing cover.

“I haven’t listened to this track in a while,” the musician said. “So let’s see if anything new leaps out at us.”

Lara proceeded to ponder what she would do to spice up the fan-favorite theme for her stream. “I’m probably going to make this a bit more chill,” she stated. “There’s not a whole lot to this track when you think about it.”

As she continued to think about her approach, the song requester czech_meowt appreciated the streamer’s effort.

“This is amazing,” they wrote. “Thank you for entertaining me with this request.”

Darude Sandstorm is well-known for not only being played at sporting events and other media but for its place in meme culture. In internet culture, streamers who play music in the background are often asked by viewers what song they’re listening to. Viewers sarcastically reply “Darude – Sandstorm.” It is because of the song’s deep meme ties that it was likely requested to begin with.

Eventually, the piano player worked her magic and put together an impressive impromptu cover of the hit song and even pulled off a great outro by dialing back the pace and fading out majestically with a big smile on her face.

What makes it even more special is the fact that Lara’s songs are not rehearsed, and it’s all chat-driven content from requests.

Lara’s musical talents have earned her quite a following with over 200,000 on the streaming platform. Her YouTube channel documents some of her best covers featuring tracks from games such as Castlevania, Chrono Trigger, and The Legend of Zelda to movies like Halloween and Jurassic Park.

There’s no telling how much bigger she can become if she keeps producing solid covers like this.