Following the announcements of Apple’s new iPhone XS line came a serious breach of privacy to one of YouTube’s biggest stars.

A video was uploaded to Logan Paul’s channel, asking users to click a link in the description to claim a free iPhone X.

Massive YouTuber and Drama Alert host KEEMSTAR took to Twitter to warn viewers that the video was a scam, stating that the link in the video’s description led to a virus.

He addressed kids in particular, knowing that a few gullible souls might fall prey to the hacker’s shady tactics. 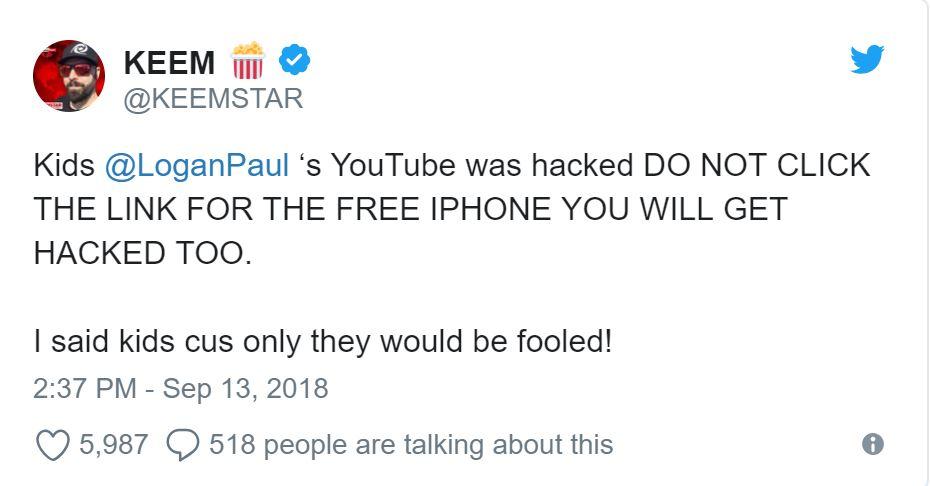 One Twitter user bravely tested the scam, and stated that the link led to a series of “infinite giveaway ads” as seen on other websites.

The video was subsequently removed from YouTube for violating the platform’s terms of service, confirming that the link was, indeed, a hack. While the original video is no longer available, multiple screen recordings of the incident have since been uploaded to YouTube to document the hack.

This isn’t the first time one of the Paul brothers has been hacked, either – Jake Paul responded to an alleged hack in December of 2017 to his YouTube channel and Instagram account.

Logan has made no comment on iPhone giveaway video, which was posted on September 13.