Is YouTube down? Users reporting outages on January 8 [UPDATED]

YouTube has confirmed that the platform is back and functional for all users after many were experiencing outages across the world.

And YouTube is back! Thanks for your patience while we worked to fix it. https://t.co/fyO7zaWBpe

It looks as though YouTube has gone down for many users across the globe reporting that they are unable to access the popular site.

Shortly after 12pm PST on January 8, reports of a possible outage started to pop up on social media.

The majority of outages look to be centered in Europe and on the East Coast of the United States, according to Outage.Report. 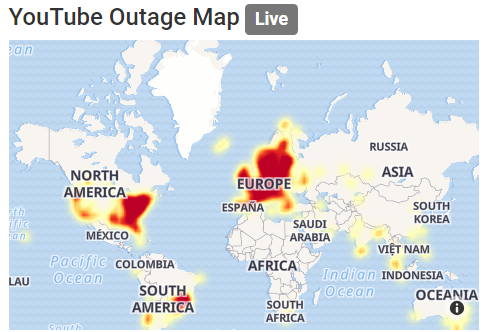 YouTube acknowledged the issue at 12:34pm EST, stating that they are aware of the issue are will update with more information soon.

Some users have suggested that simply signing out of your accounts might fix the issue, but it’s not known is this will solve the issue for everyone.

As soon as we know more information, we’ll be sure to update this post!