One of the owners of FaZe Clan, Ricky Banks, has revealed he is on the lookout for a fresh face to join the organization and live in the new “FaZe House”.

The YouTube star, who currently resides in the “Clout House” with the likes of Bryan ‘RiceGum’ Lee, also asked fans to help him make the decision, saying:

“I wanna recruit someone to FaZe and I wanna throw them in the new house. Who deserves the opportunity? Tag some people”

FaZe Clan is one of the biggest esports and online entertainment organizations on the planet and home to some of the most successful YouTubers, streamers and professional players. 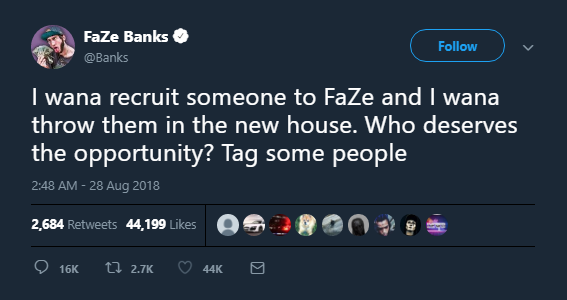 An opportunity to join the ever-growing company is something that most content creators can only dream of – especially one that comes with a ticket to move into the new FaZe House.

Presumably Banks is talking about one of FaZe’s Hollywood Hills houses. In July it was revealed that there would be a total of three FaZe houses in the area, all on the same street, including the Clout House and the house that the FaZe Fortnite players currently reside in.

Having asked for suggestions on Twitter, Banks is sure to be inundated with suggestions ranging from popular Fortnite streamers to vloggers and YouTube commentators.

The former Call of Duty trickshotter and his FaZe Clan colleagues have proven themselves to be astute businessmen since the organization’s creation, constantly keeping their fingers on the pulse of what content, game, or personality is the rise.