The First Xur Appearance of Destiny’s Forsaken was Hilariously Disappointing

Destiny’s exotic merchant Xur appeared for the first time during the new DLC Forsaken and players were expecting big things.

Unfortunately, he returned with no new DLC exotics, repeats of what was on sale last week and even a glitch.

Despite the vast amount of exotic’s in Destiny, Prometheus Lens and Ashen Wake were sold the previous week as well.

Adding to the disappointment was a glitch that caused Fated Engrams to not be sold by Xur this weekend.

Fated Engrams are weighted based on your personal collection and give you a duplicate protected exotic.

Xbox and PC players were looking forward to Xur’s Fated Engram particularly this week, since the PlayStation exclusive Borealis was supposed to be available to them.

Finally, an all-new feature of Forsaken was Xur’s location would be hidden on the game map and required players to find him. However, the search was anti-climactic as Xur was found in his previous Tower location.

The Destiny community took to social media and reacted to the Xur disappointment. 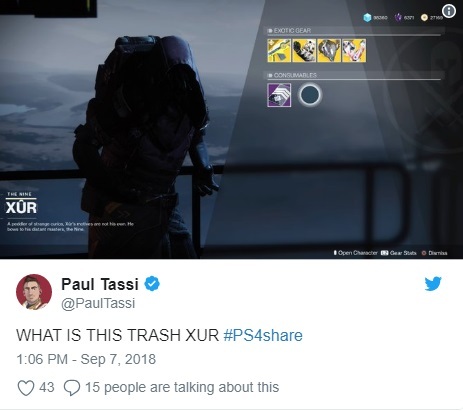 Not everyone is disappointed with Xur however, some players like the feeling of earning an exotic through gameplay. 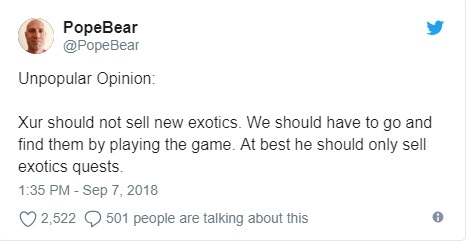