The CEO of Ukranian esports organization Windigo, best known for their CS:GO team, has had his Twitter account suspended, after he replied to a player’s claims of unpaid salary with a death threat “meme”.

Professional CS:GO player Teodor ‘SPELLAN’ Nikolov, who currently plays for Epsilon, posted a TwitLonger on February 12, claiming that he had not been paid up to 10 months worth of salary from Windigo, nor had he received his share of prize money which he helped win.

SPELLAN also accused the CEO of demanding an exorbitant buyout fee for him “so I [couldn’t play elsewhere] while I was in my best [in-game form] ever.” He closed by admitting “I know it’s my fault for signing the contract, I just wanted to share with you!”

In September 2017, kNg told fellow pro Pujan ‘FNS’ Mehta “you’ll prove it or I’ll kill you”, after FNS accused kNg and his Immortal’s teammates of being hungover during the DreamHack Montreal grand final, where they forfeited the first map.

The phrase “you’ll prove it or I’ll kill you” has since become a commonly used phrase in the CS:GO community, referencing the kNg outburst, and Bednarskyi posted the phrase in response to SPELLAN. 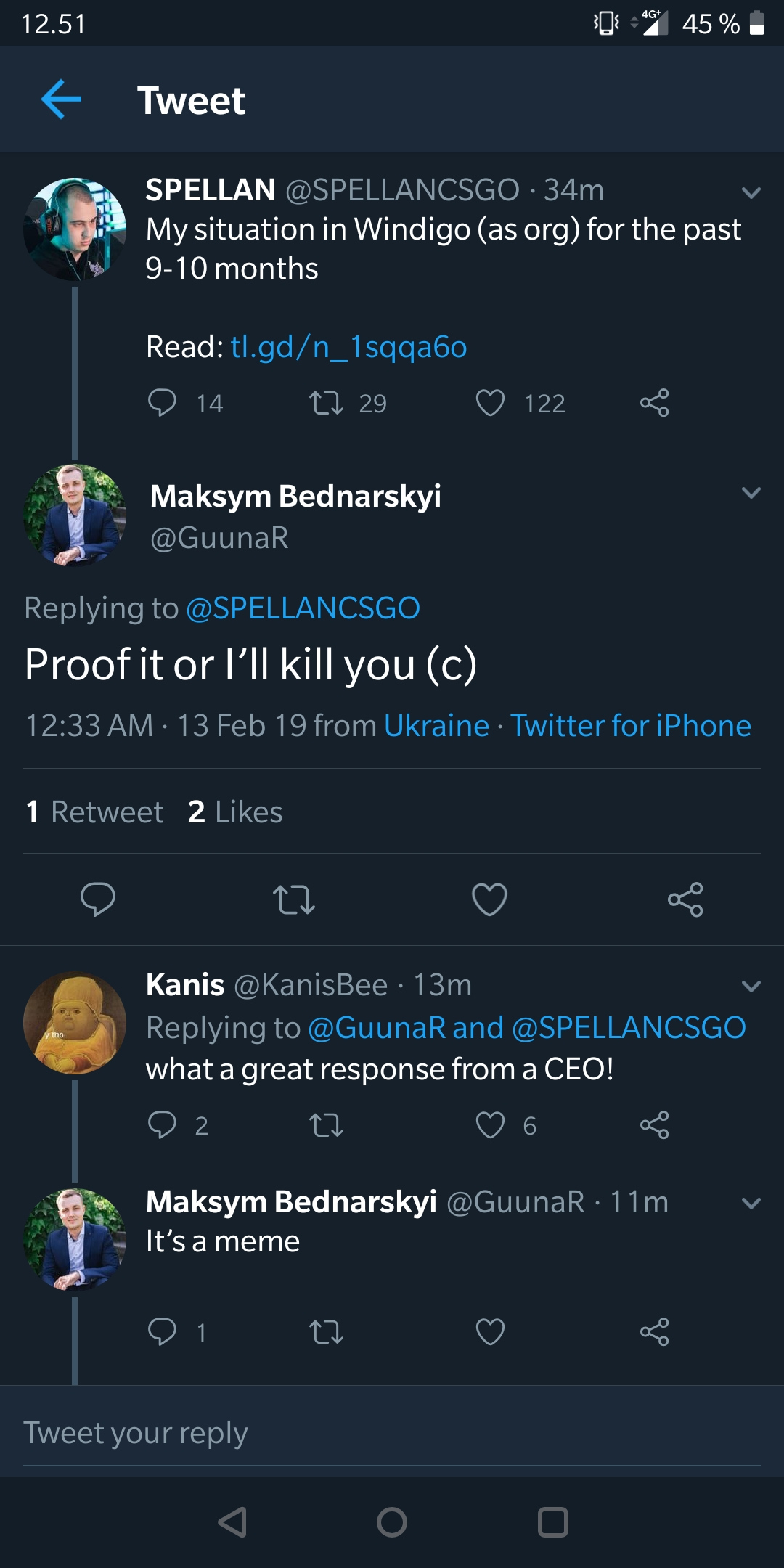 Despite replying to another user to confirm it was just a “meme”, Twitter doesn’t appear to have taken the post lightly, as Bednarskyi’s account has been subsequently suspended.

SPELLAN himself also took the reply seriously, or at least the “prove it” part. He said he could provide bank statements which would corroborate his claims of unpaid salary and prize money.

Yes , i can also provide bank statement of transactions from salaries to my bank account from the Company (Windigo) from the last year or from the prizepools which u have to send 100% of my part every time.Oh wait you didn't use that point on contract sorry. Good night!

@s1mpleO im pretty sure you know the guy Maksym "Guunar" Bednarsky :joyful::joyful: I know its the biggest joke

It’s unknown why SPELLAN chose to make these accusations public at this time specifically. He left Windigo to join Epsilon on January 31, after having spent much of 2018 inactive on the Windigo bench.

In his TwitLonger, it appears SPELLAN does not expect to receive the money he believes he is owed, due to the contract he held with Windigo.