Will 100 Thieves Ever Return to CS:GO? - Dexerto
CS:GO

Will 100 Thieves Ever Return to CS:GO?

Matthew ‘Nadeshot’ Haag appears to have let slip a hint about 100 Thieves being on the lookout, or at least open to suggestions, for a Counter-Strike: Global Offensive roster. But is too early to start hoping?

UMG’s Call of Duty commentator and analyst Landon Sanders Tweeted the 100T owner saying “I’ve got the dream lineup, Nadeshot. We should talk” and got a response from Haag that simply said “bang my line”.

However, it appears that Nadeshot mistook Landon for someone else, responding again moments later with “Not gonna lie, thought you were a CSGO analyst”! 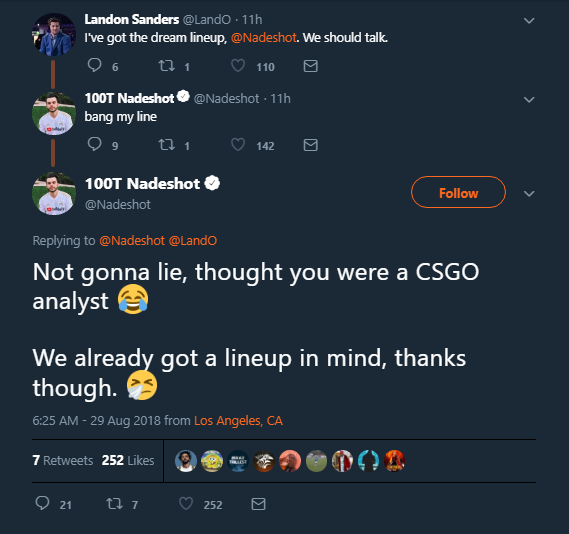 100 Thieves have been making headlines recently as they are entering the Call of Duty esports scene – the same scene that Nadeshot made his name in – for the Black Ops 4 season.

They announced the acquisition of former Team Kaliber stars Kenny ‘Kenny’ Williams and Maurice ‘Fero’ Henriquez on August 28, and Nadeshot made it clear in his response to Landon that they have “already got lineup in mind” when it comes to completing the CoD roster.

But what of Nadeshot’s response when he believed that Landon was a CS:GO analyst? The Tweet quickly made it to the front page of the /r/GlobalOffensive subreddit as fans speculated over whether this was a throwaway comment or a hint at more serious intentions.

100 Thieves has owned a CS:GO roster in the past but the Brazilian team never played an official match and was released in its entirety after a series of unfortunate events that ranged from visa issues to community backlash over comments made by Vito ‘kNgV-’ Giuseppe on Twitter.

While Nadeshot’s recent CS:GO comments are far from the statements of certainty that he used when discussing a potential CoD roster, they certainly seem to suggest that 100 Thieves are open to the possibility of attempting another Counter-Strike venture.