Tensions between CS:GO stars Oleksandr ‘s1mple’ Kostyliev and Dan ‘apEX’ Madesclaire have flared up once again, this time after Natus Vincere apparently failed to show up to a scrimmage on time.

Fans of the Global Offensive pro scene know that the space isn’t without its dramas. While players tend to try to keep things within Valve’s servers, disagreements can sometimes spill over onto social media.

This time around, the two pros in question have had their history of Twitter jabs aimed at each other and neither one was backing down for the next installment in their publicized bout.

In a June 27 post, apEX was clearly heated since his team’s latest scrim partners had been late, and was not shy about shining the light on the org at fault.

“I wish a team could be on time at least once in a year,” apEX said in a since deleted tweet. “But it feels like respecting the opposing team isn’t normal. Natus Vincere.”

Not one to take a hit lying down, s1mple chimed in with a simple “yes yes yes,” which set apEX off. Fans think the Vitality pro’s next reply was alluding to a comment made by s1mple in years past in a separate spat with apEX.

“Biggest r*tard on earth,” apEX replied to s1mple. “Don’t tell (your) manager to come to me next event to shake hands.” 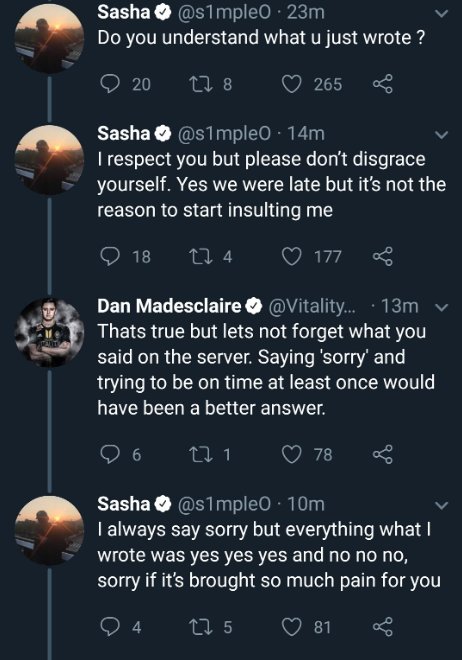 A section of the since deleted tweets from apEX.
600[ad name=”article3″]

S1mple then pointed out that the comment seemed unwarranted: “Do you understand what  you just wrote? I respect you but don’t disgrace yourself. Yes we were late but it’s not a reason to start insulting me.”

The reply prompted two Vitality players in apEX and Alex ‘ALEX’ McMeekin to call out the CS:GO superstar for trying “to be the victim,” recalling a previous comment made by s1mple on private in-game servers. 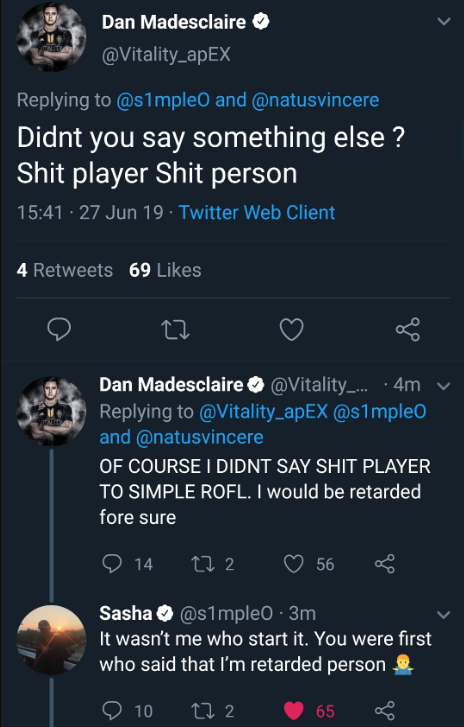 The closing thoughts from the online exchange.
600

“Didn’t you say something else?” apEX said, before repeating what s1mple had apparently typed in-game. “Sh*t player, sh*t person.”

“Don’t play this card on twitter man,” ALEX said. “Say what you said on the server and don’t try to be the victim on Twitter.”

Don't play this card on twitter man, say what you said on the server and don't try to be the victim on twitter

While the last comment by apEX sent fans in a flurry of confusion as to why he would burst out like that, the pro later clarified that he was simply reiterating what s1mple allegedly said prior.

The entire spat didn’t seem to end on a conclusive note of understanding or lament, but hopefully the pros settle their differences before their next matchup.