CSGO: PashaBiceps throws out analyst and takes over desk in skit - Dexerto
CS:GO

CSGO: PashaBiceps throws out analyst and takes over desk in skit

CS:GO legends Jarosław ‘pashaBiceps’ Jarząbkowski took over the analyst desk in hilarious fashion, as the pro player made an appearance at the V4 Future Sports Festival in Budapest.

Pasha, a former member of the Virtus.pro squad that forged the Polish dynasty, has struggled to find his former self since his departure from a five-year stint with the organization.

After moving to an inactive role on VP at the beginning of 2019, Pasha joined fellow Polish organization, AGO, in a bid to revitalize his CS:GO career. Following a short stint with the lineup though, Pasha currently sits without a professional team. 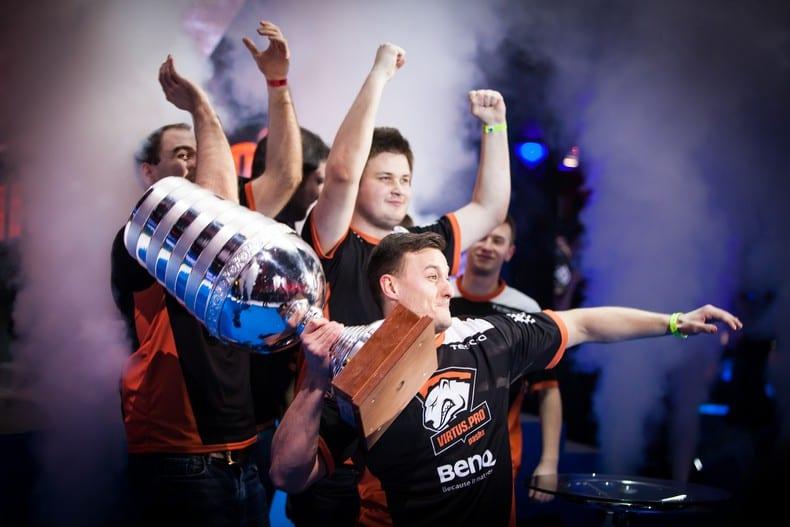 Pasha was once a part of the ‘Golden Five’.
[ad name=”article2″]

Within the same month of his departure from AGO, Pasha has now found himself at the V4 Future Sports LAN tournament, where his ex-teammates in Virtus.pro are competing for the lion’s share of the $300,000 prize pool.

After VP overran mousesports with a clean 2–0 sweep, the analysts desk was breaking down the match before they conducted a spoof designed to rile up Pasha, involving both Matthew ‘Sadokist’ Trivett and Hungarian caster, Balázs ‘Draulon’ Lengyel.

By way of a ‘good cop/bad cop’ routine, the analyst duo angled their spoof towards mocking VP’s “fluke round” vs. mousesports, in which Draulon sarcastically insinuated that Sadokist was “just a Virtus.pro fanboy.”

Trivett subsequently requested security, which was a cue for Pasha to march behind the analyst desk and live up to his namesake, by carrying the Hungarian off stage.

Disclaimer: No analysts were hurt in the making of this Oscar-worthy lampoon.

After the comedic skit was said and done, pashaBiceps hopped onto the analyst desk to discuss the dominant showing from VP, with Sadokist introducing him by jokingly adding: “That was the biggest clutch you’ve had in about the last year” as he settled onto the desk.

Although the Polish powerhouse currently has no team to compete at events such as this, his frequent appearances and community interaction are exactly why he remains a fan favorite.