The WorldGaming Network Championship Series is hosting a major tournament for Call of Duty: Black Ops 4 and we’re here to make sure you don’t miss a second of the competitive action.

Despite the fact that it’s not officially part of the CWL, WorldGaming Network’s annual Call of Duty tournaments are popular draw for fans as they normally feature some of the biggest names in CoD esports, both on the professional and amateur levels.

After several weeks of qualifiers and anticipation, eight teams will get together in Toronto, Canada for what should be an epic event, and you can catch up on everything there is to know about it down below.

After two qualifying stages, the third and final stage of the WGN Black Ops 4 tournament will take place April 6-7 at the Scotiabank Theatre in Toronto, Canada.

Here is the full schedule for the event, including the start times for each round of matches within the two groups.

How to watch the WGN Black Ops 4 tournament

The entirety of the competition will be livestreamed on the official WorldGaming Twitch channel, which we have included below for your convenience.

Live brackets and scores for the WGN Black Ops 4 tournament

WorldGaming Network will be providing a bracket for this tournament that will be updated live on the event’s website, so you can keep an eye on all of the match results by clicking the link below: 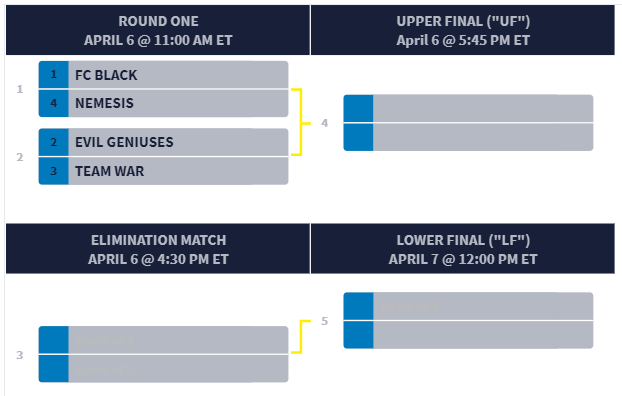 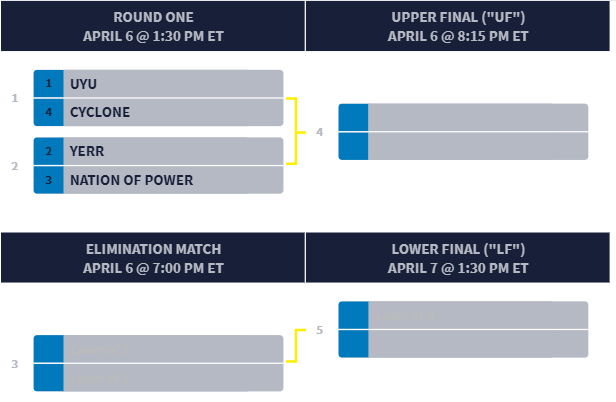 Teams and rosters in the WGN Black Ops 4 tournament

The WGN Black Ops 4 tournament features eight total teams – four of which qualified directly via the Stage One Open Qualifiers and four which advanced after having to play in the Stage Two Closed Qualifier.

You can check out all of the teams that will be competing in this competition below, along with the five-man roster for each team.

GROUP A TEAMS AND ROSTERS

GROUP B TEAMS AND ROSTERS

The eight teams that have qualified for the WorldGaming Network Black Ops 4 tournament have been split into two groups, as shown above.

The four teams within each group will play their own double-elimination mini-bracket, from which two teams will advance to the tournament playoffs, which itself will be single-elimination. All of the matches played will be best-of-five, presumably following the official CWL ruleset.

The entire prize pool for this tournament will be $42,500 CAD (Canadian dollars), $25,000 of which will go the winning team. The prize money won by each team will be evenly distributed between all five of the team members.

In addition to the $25,000 prize, the winning team will also earn a fully-paid trip and team pass to attend and compete at the CWL Anaheim Open Bracket tournament in June 2019.

You can check out the full prize breakdown down below, which indicates that all eight teams will be awarded a portion of the overall prize pool