When is Call of Duty Warzone coming out then?

Warzone is coming out tomorrow – something Call of Duty fans have said just about every Monday for the past several weeks. March 3 was tipped by many to be the day Modern Warfare’s new battle royale released but, of course, that turned out to be false. So, when is Warzone actually coming?

Modern Warfare Season 2 brought an array of new additions to the game but perhaps most noticeable is what it excluded. The main menu of Modern Warfare was updated to include a ‘classified’ section which has been universally accepted as where the eventual battle royale mode will release.

It initially led fans to believe ‘Warzone’ would drop the day after on February 14. This was one of many disappointing days for those who are awaiting its release.

For battle royale fans the wait for Warzone has been agonizing…

It’s getting to the point now where it seems silly to keep speculating on when Warzone will indeed release. That’s not stopping anyone else though, and it certainly won’t stop us trying to piece the seemingly impossible puzzle together.

March 3 had obviously been extra anticipated and outside a change of plans, this was wrong, too. However, there is a slight glimmer of hope for March 5.

That’s because Black Ops 4’s Blackout beta was released five days before version 1.0. That means we are assuming, which is a dangerous game when it comes to Warzone, that March 10 is the full release.

Hmm… Could this be a hint towards the Call of Duty Warzone release date? ?

This was spotted underground in the Piccadilly map. #Warzone pic.twitter.com/bxtpDBXKyF

Modern Warfare’s battle royale is by no means guaranteed to keep the same schedule as what Treyarch did with Blackout, though. There may not even be a beta.

Regardless, that doesn’t rule out March 10 as the full release. It is expected a trailer will come beforehand and that many streamers/influencers will show off footage that they captured in a super secret meeting in Los Angeles back in February.

This also aligns with the schedule of the weekly challenges. In order to fit the four supposed Warzone challenges in before the end of Season 2, it would have to release on March 10.

Call of Duty and clown memes?

Those within the CoD community have even been poking fun at themselves. Call of Duty fans know that updates go live in Modern Warfare on a Tuesday so it’s understandable this day has been consistently earmarked as the potential Warzone release day. 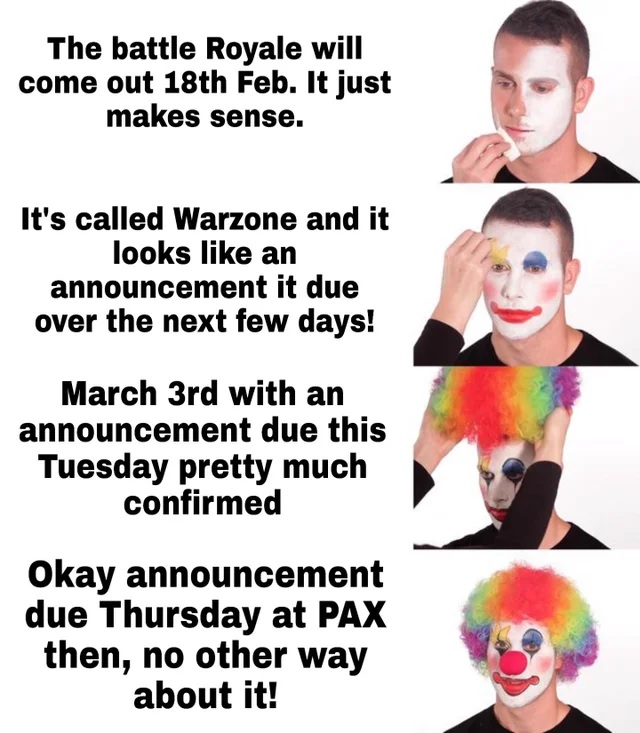 Those speculating on a Warzone release date…

Every Tuesday is the same – hype builds for a potential announcement/release and then nothing happens. This has resulted in many clown memes being posted from players poking fun at those (and themselves) who get excited every week.

Elsewhere, the Warzone marketing campaign, or lack thereof, has been mocked. Some would argue that Call of Duty’s silence is actually marketing genius. After all, the mode is still the hottest topic in CoD forums.

I used to think I was the clown expecting Warzone. But now I realise Infinity Ward is the real clown for not even marketing a battle Royale mode that most people already know about. pic.twitter.com/aFlUuvNuwB

Just when battle royale players were hoping for an announcement, Call of Duty instead decided to reveal a new Tamagotchi, of all things. The description of the bundle even read: “Dinosaurs, fire-breathing dragons, and an evolving watch that will have you gaming the warzone.” It appears they’re even poking fun at their own silence.

All signs continue to point to March 10 but, at this point, we’ll just take it whenever we get it. Surely Activision and Infinity Ward can’t make us wait until Season 3?