The founder of CoD Comp Stats released a list of the top 5 respawn slayers for the Call of Duty: WWII competitive season.

The interesting list started when JPKrez tweeted that Pierce ‘Gunless’ Hilman led all players in kills this season, racking up over 6,000.

CoD pro Patrick ‘ACHES’ Price pointed out that Gunless also played the most maps and would be interested in the numbers by map average instead of total.

When JPkrez sorted the numbers as ACHES wanted, by showing respawn kills per 10 minutes, Gunless was no longer the top player. 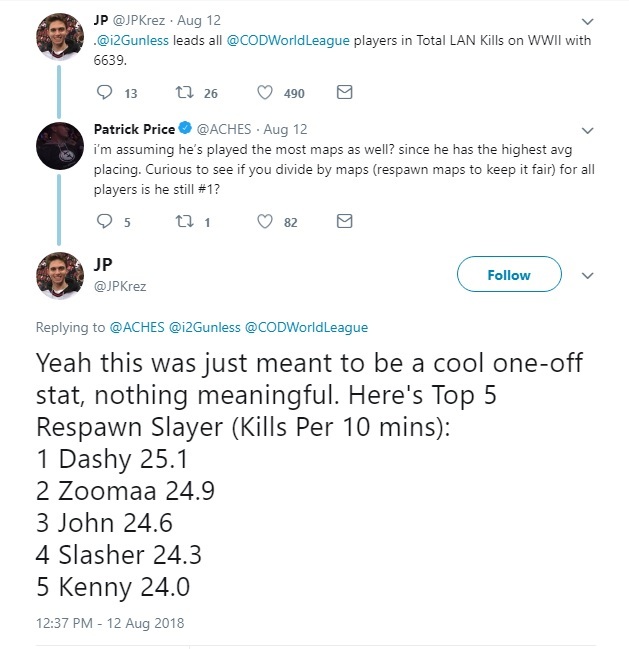 Brandon ‘Dashy’ Otell came out on top with a rating of 25.1 kills per 10 minutes.

Dashy and his compLexity team struggled in Stage 2 of the CWL Pro League, but may have outperformed the low expectations that were set for them.

Thanks to Dashy’s play, coL finished Stage 2 at 6-8, good enough for a tie with Luminosity for 5th place.

Unfortunately for Dashy, he is the only player in the top 5 of respawn kills to not win a major this season. ZooMaa took home the Stage 1 Playoffs with FaZe Clan, John won CWL Birmingham with Luminosity, SlasheR won CWL Anaheim and CWL Seattle with Rise Nation and Kenny is the most decorated of the bunch – winning CWL Dallas, CWL New Orleans and the Stage 2 Playoffs for Team Kaliber.

Dashy and compLexity will have one final chance to win a WWII major at the 2018 Call of Duty Championships, which begin on August 15.

coL is in Group E with second place slayer ZooMaa and FaZe Clan. Dashy’s former team E6 is also in Group E, along with Morituri.