In a competitive Call of Duty community that is full of superstars, there is one name that everyone is currently talking about – the CoDBurner.

Since the CoDBurner re-introduced themselves after the conclusion of the WWII season, many within the community have been trying to figure out their secret identity.

OpTic Gaming pro player Ian ‘Crimsix’ Porter has chimed in on the subject, countering the popular belief that many within the pro ranks are already aware of who the CoDBurner is.

To clear something up I see on Reddit: I’d say more than the majority (90%) of pro players don’t know who the CODBurner is. The other 10% is probably in on it.

He then listed a series of his opinions on the CoDBurner, the nature of their secret identity, and proposed a strategy on how their identity can be determined.

Now, in my opinion:

-Burner is definitely a pro or literally a pros best friend.

-Burner will never reveal himself

-Burner is 2 or more people (essentially)

-CODBurner is a man of the people, but a complete weirdo. 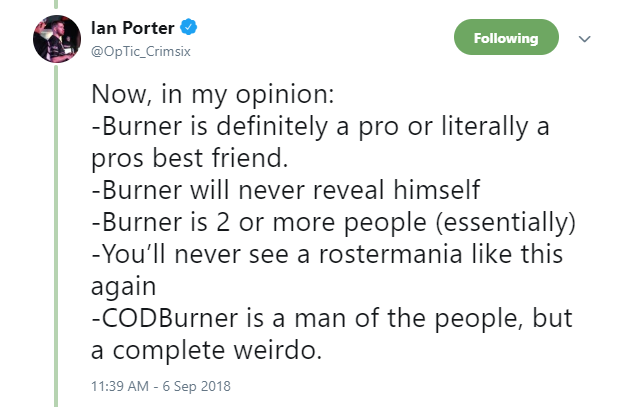 And lastly, during these “developments”, I’d look to see who has their mic muted in calls because the real Burner is most likely laughing his ass off at these daily witch hunts we’re having.

Whether or not the CoDBurner’s identity will ever be revealed remains to be seen; rumors can be seen popping up on social media on a daily basis, some more ridiculous than others.

Regardless, it seems as though they aren’t too worried about it, as the mysterious and unknown person of interest continues to leak private information online about future CoD roster changes, insider dealings, and more.