Call of Duty publishers Activision have revealed new details about some of the weapon mechanics players can expect in Modern Warfare.

Excitement and anticipation are constantly continuing to build up for Modern Warfare as its October 25 release date gets nearer and nearer.

While not much information has been released about the game, especially in regards to the Multiplayer, it looks like the developers’ silence could be broken soon.

On July 2, Activision posted some new details about the weapon animation system and mechanics in the upcoming title, coming straight from Mark Grigsby, Animation Director at Infinity Ward.

Essentially, the weapons aspect of the game has been made to look realistic, believable, and “just right,” giving players the authentic feel of using what are virtual versions of real military equipment.

The supposed realism of Modern Warfare will extend through the weapons and weapon animations.
[ad name=”article3″]

Modern Warfare will feature a totally revamped reload system that will change based on factors such as the type of weapon being used, how much ammunition is left in a clip when reloaded, and what attachments are present on the gun.

The most noteworthy take from this was regarding the reloading of weapons when aiming down sight, which will differ from traditional CoD titles.

“One other thing we added this year is the ADS [Aiming Down Sight] reload,” Grigsby said. “In the past, if you’re ADS, and you’re shooting and you reload, the weapon would go off to the side, and you’d have to retrain to get to your target. This time if you reload, it stays on the target, so you can stay in the battle.” 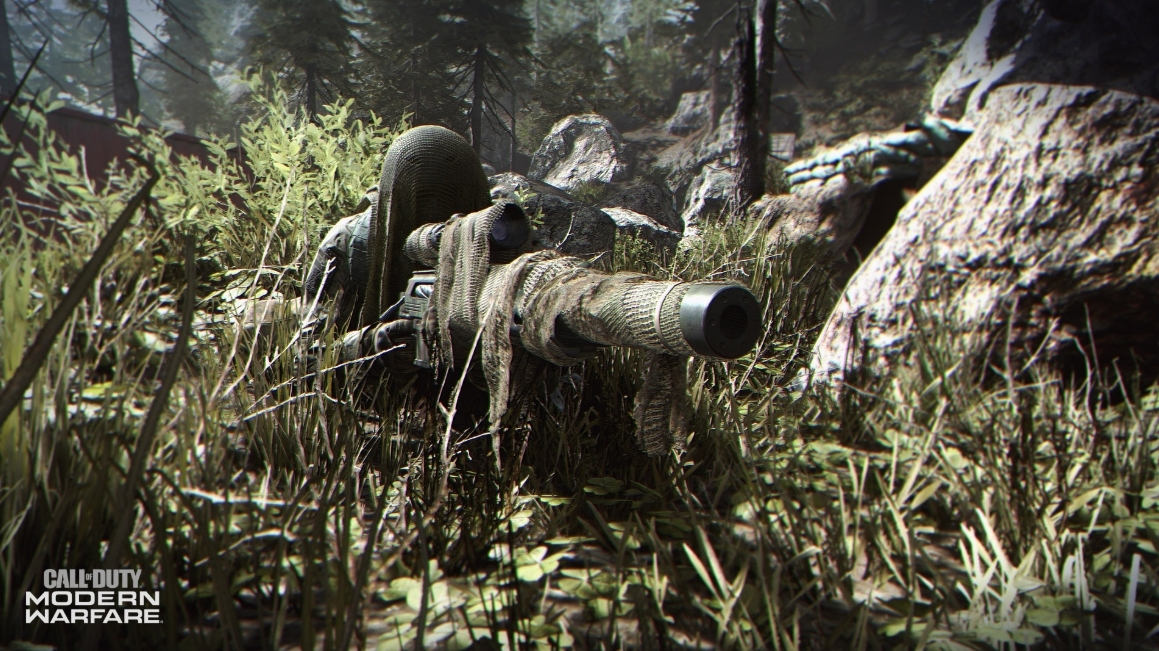 Reloading a weapon while ADS will keep your aim intact, thanks to the revamped reloading system in Modern Warfare.
[ad name=”article4″]

One aspect of weapons that Infinity Ward have spent some time on is their movements and animations when players aren’t actively engaging in combat.

New animations, called Active Idle, have been added to weapons that are in an idle state, such as movement on the gun “to make it look like it’s not bolted to the camera,” or, when looking around, the player’s head will slight lead, with the gun travelling behind.

You can check out Activision’s entire weapons post below:

One of the most important pieces of the Call of Duty: Modern Warfare game-creation puzzle; an aspect of the game that bridges the new engine, art, narrative, design, and even the performance capture, is the believable animations the team at Infinity Ward aim to achieve. How the various characters in the game move and interact is of paramount importance to creating both an entertaining and immersive game.

Most importantly of all; the look and feel of the weapons need to be “just right”.

The Devil is in the Details: Making Badass Weaponry

Mark Grigsby, Animation Director at Infinity Ward, takes up the story: The weapon is one of many important pieces to the game, and to the overall experience players will have. We wanted to make sure that the weapons were animating to a degree that would make the players feel like a Tier 1 Operator. Back in the day, Stephen Miller, Audio Director and I were responsible for getting the feeling of the first Modern Warfareweapons right, and to come back and do the same thing again…one of my duties is to make sure that the weapons are that badass.”

“The devil’s in the details,” Grigsby agrees: “It may look simple. A lot of people play video games and there are tons of great first-person action games, with weapons that are ubiquitous. They have reload animations, they have different sounds and effects and that’s all great… but to me, there is something special about Call of Duty.” And this time around, the animation team put a whole lot of attention into the all of the details, to ensure the feeling of the weapons is as accurate as possible.

This extends to the ‘power’ of each and every weapon too; the feeling you get when you launch a satisfying projectile strike against an enemy who refuses to yield. This includes “interacting with the environment itself, so when you shoot these weapons, you feel the power of the weapon, but you also see the impact of the weapon within the game world, in terms of the sound and physics.” There’s a real difference between the impact a .50 cal round has when it hits a wall, compared to a smaller caliber round. Tag an enemy with a larger caliber round and they’re sent flying back, compared to a smaller round. Use beefier rounds to disintegrate doors more adeptly, too. Also expect to notice the difference the sound assault rifles make when you equip one with or without a muzzle brake, and the reverberations when such a weapon is firing in an enclosed room, or out in the open air.

Other animations and effects simply add additional layers of believability to the impact a weapon makes, so you’re not jarred out of the game’s reality by a lack of impact accoutrements: “We needed to do different effects on the weapon’s target, so that the power of these weapons translates into the targets that you shoot. The sparks, the smoke, the effects, all of it has to be representative of the power that you’re releasing from your weapon, so it all comes through with our effects.”

Grigsby and the team focused on many aspects of weapon animations to improve the overall appearance; even down to how your character reacts when you’re not actively engaging the enemy in combat:

“We developed a new level of model fidelity,” Grigsby tells us: “Back in the day, we saw a lot of idle [animations] that moved more like you were on the deck of a ship, swaying back and forth. You don’t usually stand still in Modern Warfare, but when you do, we wanted to make sure it looked natural; real quick movements using your muscles. We call this the ‘Active Idle’. When you go up the stairs, we added a bit of movement on the weapon to make it look like it’s not bolted to the camera. When you look around, we wanted to do a little bit of leading with the head, and then the gun travels behind. Our previous Call of Dutygames had a bit of that, but we’ve actually deep-dived into it this time around.”

Lugging around a variety of ordnance with a range of offensive capabilities also means taking a look at how each of them maneuvers relative to its perceived heft.

“Different calibers and different classes have different weights to them, and we’ve assimilated that data. An LMG [light machine gun] here; it’s a little stiffer, not as flimsy as an [assault rifle]. We worked on our reloads. The reload to me is the pinnacle of the weapon; it makes you feel – after you’ve taken down five different dudes in a room – and you reload, you go ‘shit yeah, you’re done!’ We wanted to bring that that flair but taken to a new level where it’s just like one animation.” Everything is as seamless as possible, with reloads dependent on weight, type, and without any stilted or odd transitions between animations.

There’s also differences depending on your bullet expenditure too: “If you reload from empty, you would reload the weapon, rack it, and then you’re good to go. A tactical reload is when you maybe shot one or two rounds, and you want to replenish your magazine.” An entirely separate animation was created depending on your ammunition use. “In the past, we would never physically show that transition of one mag to another, but this time around, everything’s physical, so if you have an extended mag, like a drum perhaps, or a long magazine, all of the movements within every reload are visceral, strong, aggressive, it gives another feeling of power and representing the Tier 1 operators that utilize these machines.”

Advancements to weapon animation also led to improvements to the gameplay itself too, as Grigsby explains: “One other thing we added this year is the ADS [Aiming Down Sight] reload. In the past, if you’re ADS, and you’re shooting and you reload, the weapon would go off to the side, and you’d have to retrain to get to your target. This time if you reload, it stays on the target, so you can stay in the battle.”

Welcome to the Gun Show

The animation team spent months crafting, learning, and perfecting every single weapon movement in the game: “We used a lot of reference with our Navy SEALs advisors; how would they actually reload these weapons?” The answers they gave lead the team to the results you see in the game itself.

“We also sent the team out to firing ranges to shoot these weapons so they could actually get the feeling and the power of them. The first time I shot any of these weapons was on Call of Duty® 4: Modern Warfare®. I’m a good animator, but I didn’t think that the power and visceral nature came through until I shot. We educated all the animators this time around and I actually think it comes through really well.”

Another thing we wanted to do was use our scopes more realistically and showcase them in the environment. The detail and slight magnification you can see through a scope “is another hint of detail, we give a little bit of magnification to the scopes when weapon is at the hip.” As for sniper rifles? “We also have the higher scopes use the technical advancements created by the tech team headed by Principal Rendering Engineer Michel Drobot.”

But as Mark Grigsby quickly points out, there is something missing here. “All of this tech, this lighting, art, this animation…” well, it wouldn’t be worth the time and effort to animate to new levels of believability if each weapon didn’t have a distinct voice.