The new Season One Battle Pass is now available in Modern Warfare and it includes a flurry of new content such as two new weapons, cosmetic items, CoD points, XP boosts, and more.

A fully-fledged Battle Pass has been added in a Call of Duty game for the first time, introduced in Modern Warfare as part of the massive Season One update on December 3.

Featuring over 100 Tiers, the Battle Pass gives players a whole other way to earn and unlock a lot of new content, in addition to everything else that was released with Season One.

As had been previously announced by Activision, the Battle Pass includes both free and premium content streams, the latter of which needs to be purchased with CoD points.

Below, we’ve provided a full breakdown of the important aspects of the Battle Pass, including images of all of the rewards offered throughout the 100+ Tiers.

How much does the Season One Battle Pass cost?

The premium content stream of the Modern Warfare Season One Battle Pass costs 1,000 CoD Points, or approximately $10, which has become the standard of what battle passes cost nowadays thanks to Fortnite Battle Royale.

Players also have the option of purchasing a special bundle that comes with the first 20 Tiers instantly unlocked. Those you want to purchase Tiers instead of leveling up can do so at $1.50 for each Tier, which sets the price for unlocking the full Pass at about $150.

For those who haven’t purchased the game yet, a new Battle Pass Edition has been released for $79.99. It includes 3,000 CoD Points that can be used to upgrade the Pass, along with an in-game Tactical Knife and Three Operator Packs.

The premium version of the Modern Warfare Season One Battle Pass costs 1,000 CoD Points, or approximately $10.

Important things of note in Season One Battle Pass

The Pass includes 1,300 CoD Points in total rewards – 1,000 in the paid version and 300 in the free one. However, the 12 Operator Skins are all exclusive to the premium one, so those who don’t purchase it won’t be getting any outfits.

As for weapon camos, which are called Blueprints, there are 20 of them in total – 17 paid and 3 free. Outside of that, the remaining Tier rewards include watches, regular XP and weapon XP tokens, player cards, emblems, knife skins, stickers, sprays, charms, and two new weapons, the details of which are discussed below.

Information about the Modern Warfare Season One Battle Pass.

The Season One update has introduced two new weapons in Modern Warfare for the first time since the game’s release – the Holger-26 LMG and RAM-7 assault rifle.

Both guns are available to be earned quite quickly; the Holger-26 is unlocked at Tier 15 and the RAM-7 at Tier 31.

Both of these weapons are available in the free version of the Battle Pass, which means players can earn them by just playing the game and not paying a penny.

However, those who do want to splash some cash can certainly do so and earn one or both instantly by simply buying their way to Tier 15 or Tier 31 right off the bat.

For more information about these guns, including images and in-game descriptions, make sure to visit our info page on both the Holger-26 and Ram-7. 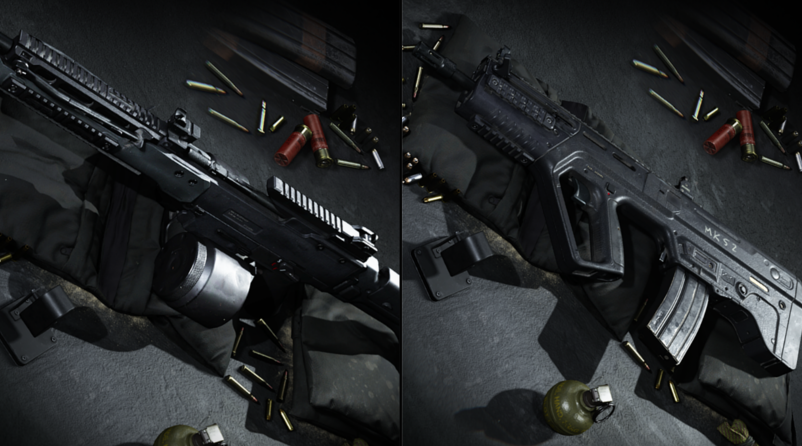 The two new Season One weapons – Holger-28 (left) and RAM-7 (right) – are both be available for free by just playing the game.

What’s in the Season One Battle Pass?

Here is the full Battle Pass as available in-game, with images available for almost all of the rewards offered at each of the 100+ Tiers.

Here is a video detailing all of the rewards available, courtesy of YouTuber ‘Espresso,’ who got early access to the Battle Pass prior to its release.

As for until when this Battle Pass will be available, nothing has been officially announced. However, leaks that surfaced prior to the Season One launch claimed that it will be ending on Tuesday, January 28, 2020 at 10 AM PT / 1 PM ET, which is presumably when the next season will begin.