UPDATE: This tournament has already wrapped up. To catch up with all the action, including final placements, top highlights, and more, make sure to visit our 100 Thieves Warzone From Home recap page.

After weeks of waiting, teases, and speculation, Warzone was finally added to Call of Duty: Modern Warfare on March 10, giving fans the chance to test their skills in the battle royale arena.

Even though the mode is in its infancy, we’ve already had a handful of competitive events – with the recent $50,000 Code Green being the standout. However, 100 Thieves and Cash App are raising the stakes, literally, by putting on their $100,000 Warzone From Home event – where $50,000 will go to the winning team’s chosen charity and $50,000 will go to the viewers.

Warzone has already proven to be a popular addition to Call of Duty: Warfare.

When does 100 Thieves’ Warzone From Home tournament start?

This competition is taking place on Friday, March 20, kicking off at 10 AM PT/1 PM ET and is expected to last for a few hours, especially since Warzone matches can sometimes take a little longer.

It will be livestreamed on the official CashApp Twitch channel, which we’ve included below for your convenience. Many of the participants will be broadcasting their POVs from their personal channels as well, some of which we’ve also included.

This competition will be played on a single-elimination bracket that’s being updated live throughout the day by organizers BoomTV.

You can always check out the most recently updated version of the bracket by visiting the Warzone From Home web-page here. 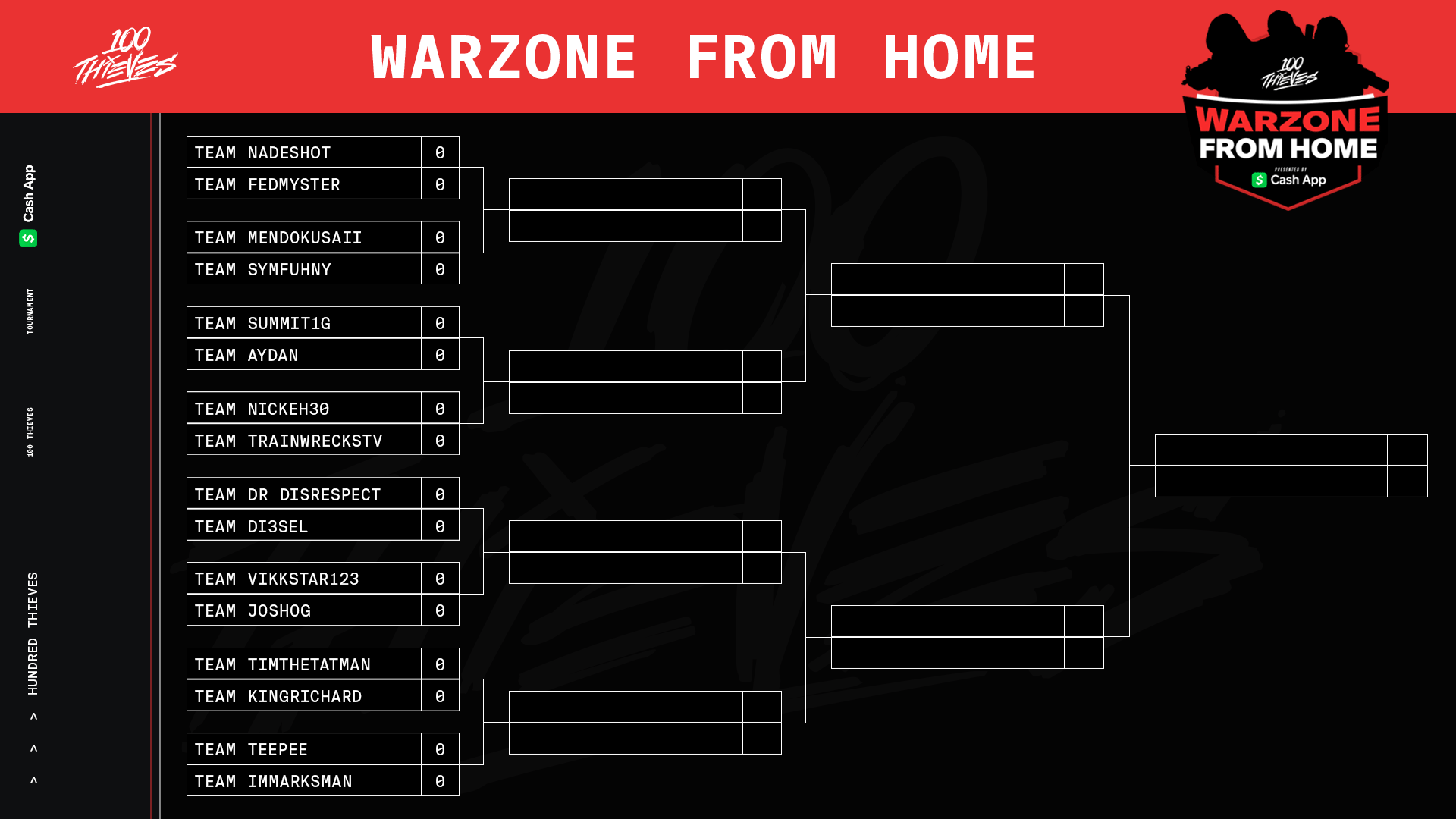 There are a total of 16 teams competing in today’s event, each one composed of three players, since the tournament will be played in the game’s standard Trios playlist.

Revealing our first 4 teams for Warzone From Home!

This single-elimination tournament features what is commonly referred to as the ‘kill-race’ format, which means the teams matched up against each other in each round of the bracket must both load into separate public matches and try to get as many points possible.

Each match is a ‘best thru 2,’ so two games of Warzone are played and the team with the more points advances. Points are earned by getting both eliminations and victories – kills are worth one point each while a win earns five.

This applies for all rounds of the competition except the final one, the grand final, which will have three games played instead of two. 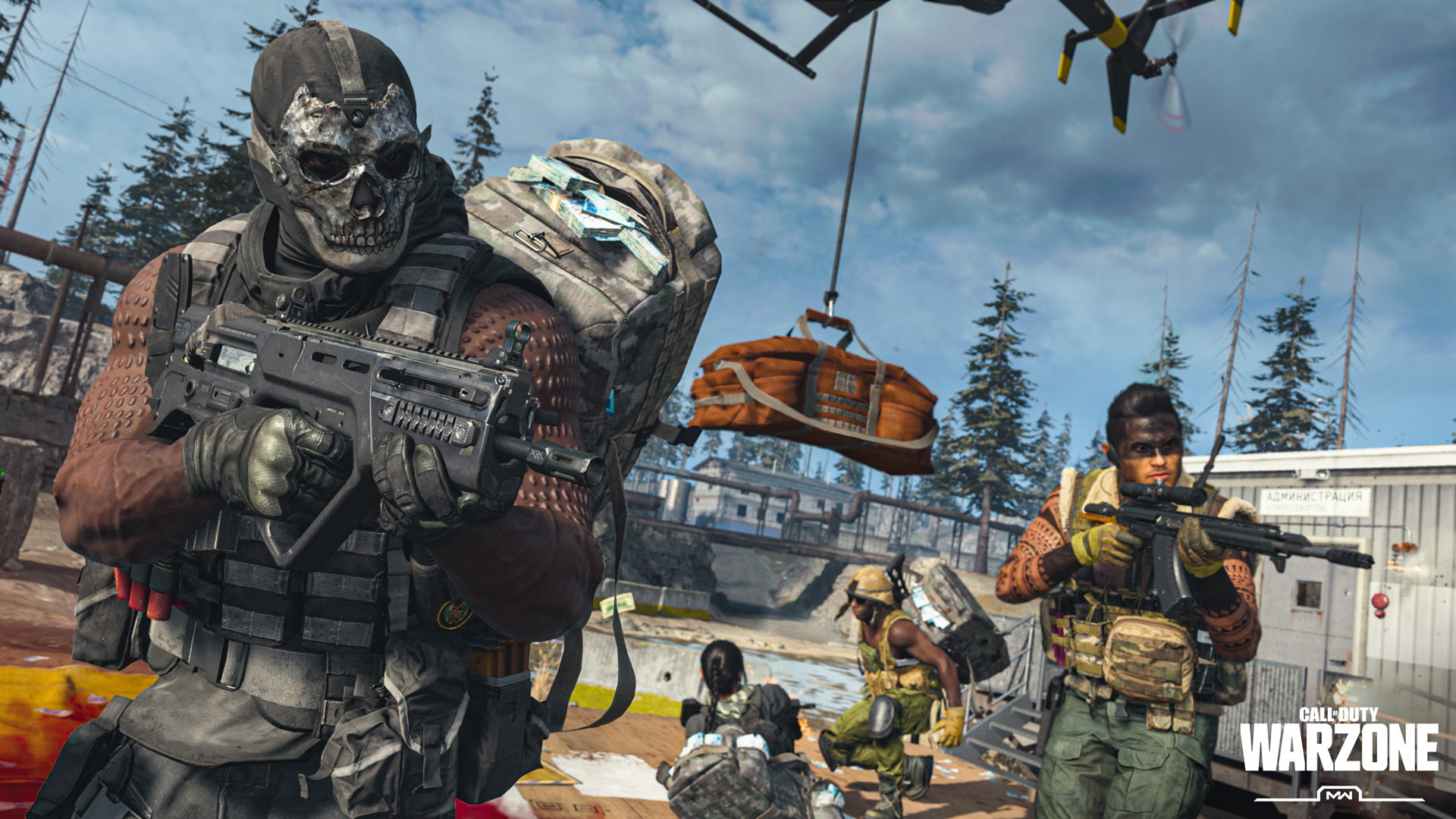 Eliminations and wins will be key to advancing in the bracket of 100 Thieves’ Warzone From Home tournament.

The $100,000 prize pool of this tournament will be split in several ways. $50,000 will be divided amongst the top placing teams, based on the breakdown below, while the other $50,000 will be given away to viewers who are active in the chat.

As part of the promotion of this event, CashApp will be giving away a total $50,000 in prizes to viewers throughout the day. In order to enter for a chance to win some cash, all you have to do is watch the main stream and type your $CashTag in the chat when prompted.