A number of Call of Duty players have reacted to their stunning early exit from the 2019 edition of the FPS title’s biggest event, CWL Champs.

Gen.G went into the final Black Ops 4 event on the year as one of the odds-on favorites to lift the trophy on Sunday, hoping to bounce back from their grand finals defeats at CWL Anaheim and CWL Finals to finish their 2019 season on the ultimate high.

The second seeds fell foul of two amateur squads in Fuego Gaming and Team WaR, losing 3-2 and 3-0 respectively, to find themselves bottom of their pool, and mathematically eliminated from the competition before the first day of competition had even concluded. 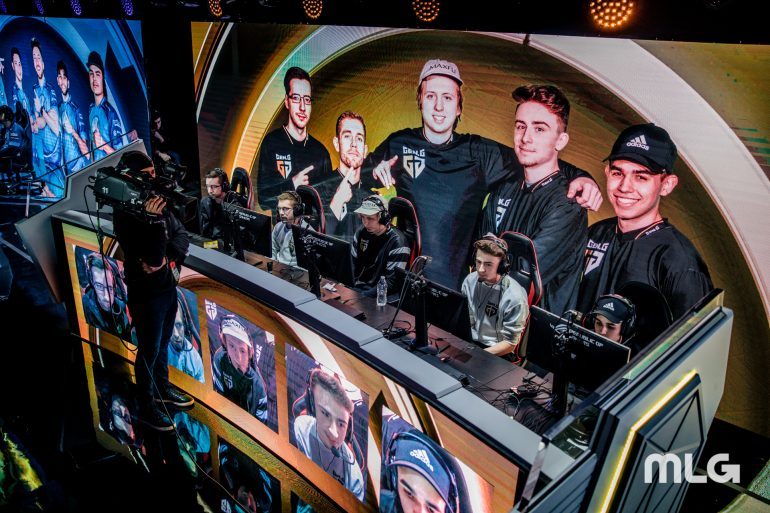 Gen.G were one of the favorites heading into the event.
[ad name=”article2″]

In the aftermath of their shock exit from the competition, and then end of their competitive season, a number of the team’s players reacted to their losses on social media, sharing their thoughts on what could have been a dream weekend in Los Angeles, which quickly turned into a nightmare.

Jared ‘Nagafen’ Harrell tweeted that he was “heartbroken” and at an “all time low” following their defeats, before thanking his squad for their season, stating: “Couldn’t have asked for better teammates throughout the year, I’m glad to have gone through all the highs and lows we had together with you guys, and I couldn’t be more proud.”

couldn’t have asked for better teammates throughout the year, I’m glad to have gone through all the highs and lows we had together with you guys. sucks this is how bo4 ended, but we had great moments together and I couldn’t be more proud @Maux @MajorManiak @ColtHavok @DylanEnvoy

Michael ‘MajorManiak Syzmaniak echoed his teammates thoughts, tweeting: “Truly one of the worst feelings in the world. We put our hearts and souls into this game and to end the year like this is heartbreaking. Got nobody to blame but myself.”

“Everyone that supports me and Gen.G, I appreciate so much. It’s been an absolute blessing being surrounded by such incredible and brilliant people throughout the year, they’re such a prestigious organization and to let them down at the biggest event is what hurts the most.

truly one of the worst feelings in the world. i won’t feed into the negative energy but man it’s crazy how the switch flips. we put our hearts and souls into this game learning/setting the meta and to end the year like this is heartbreaking. got nobody to blame but myself

everyone that supports me & @GenG i appreciate so much. its been an absolute blessing being surrounded by such incredible and brilliant people throughout the year. theyre such a prestigious organization & to let them down at the biggest event of the year is what hurts the most

SMG player Dylan ‘Envoy’ Hannon, who replaced Michael ‘Spacely’ Schmale on the roster back in March, was simply stunned by their results, revealing that he just couldn’t believe that his “year ends like this,” and that he didn’t know “what to think” as the dust settles on their performance.

The org themselves were equally gobsmacked, simply tweeting “We have no words” as Gen.G’s elimination was confirmed.

Can’t believe my year ends like this. Good luck to everyone left, don’t even know what to think

We have no words.

Finally, Chance ‘Maux’ Moncivaez blamed “complacency” for their issues, before releasing a Twitlonger describing how much the team mate to him, and how grateful he was to have been given the chance to compete at the top of Black Ops 4 in 2019.

“Last year after Champs, I didn’t know what my future held, and was scared that the last six years were going to go to waste,” wrote the 21-year-old. “Thank you so much for giving me the opportunity to play with you guys. We were scraps and nobodies at the beginning of BO4, but we banded together and became one of the best teams in the world.”

“We didn’t play our best today, but we had a hell of a year and I hope everyone gets the opportunity they deserve next year. Good luck to the rest of the teams left in this tournament. 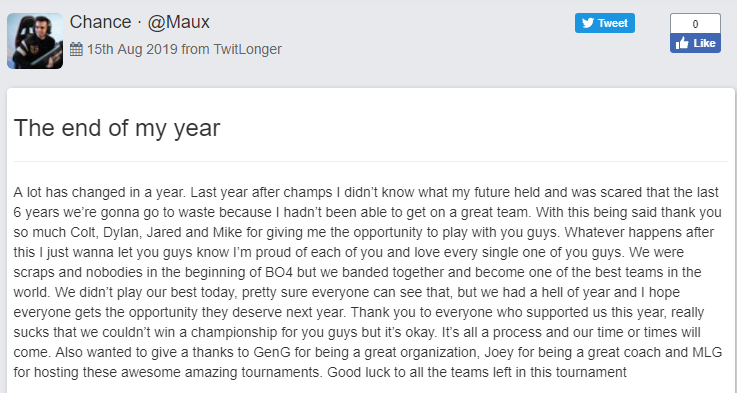 The full Twitlonger released by Maux.

What the future holds for the current Gen.G lineup remains to be seen, as next season’s franchise league is likely to major movement between players and organizations as they attempt to secure spots and rosters heading into the Modern Warfare season.

Whether this roster will enter the next game as a unit is unknown, but it appears that they are all grateful for the opportunity they had this year, even if the last tournament didn’t pan out as they had hoped.