Teams in the Call of Duty World League are banking on final moves before the transfer window closes, and a struggling Enigma6 has made some roster changes to build with their lineup in the coming events.

The CWL regular season has seen teams rise and fall throughout the year. While orgs like OpTic Gaming and eUnited have impressed throughout the season, not all teams have gelled together quite so well through now.

It’s because of this that numerous teams have been making last ditch efforts to salvage their season by changing up their roster to test out new experiments or make strong pushes for the year’s final events.

In a June 20 announcement, Enigma6 revealed their deadline moves by adding both Mehran ‘Mayhem’ Anjomshoa and Paul ‘Breszy’ Breszynski to their active five-man roster to field for the rest of the season.

Enigma6 is proud to welcome @Breszyy and @Mayhem6 to our @CODWorldLeague Roster. They will be joining @JordonGeneral, @KiSMET6_ @AdamGodRx and Coach @Sender_FN. We're looking forward to finishing the year strong in our quest for a championship. Please welcome them to #E6ARMY pic.twitter.com/kFPHakhqe1

The full squad will consist of Jordon ‘General’ General, Matthew ‘KiSMET’ Tinsley, Adam ‘GodRx’ Brown as well as Mayhem and Breszy while being led by Coach Troy ‘Sender’ Michaels.

Fans were shocked to see Bradley ‘Frosty’ Bergstrom seemingly dropped from the team, but the org is making moves to find any improvement before the season is up. Similarly, Eric ‘JetLi’ Phan announced earlier on June 19 that he had become a free agent before any official team announcement.

As mentioned before, the E6 have been struggling all year to string good results together, and are hoping that the new changes will find them some good fortune in the latter portion of the season.

Both new additions have previously shown promise in the CWL and will have a great chance to showcase what they can bring to the table for E6. 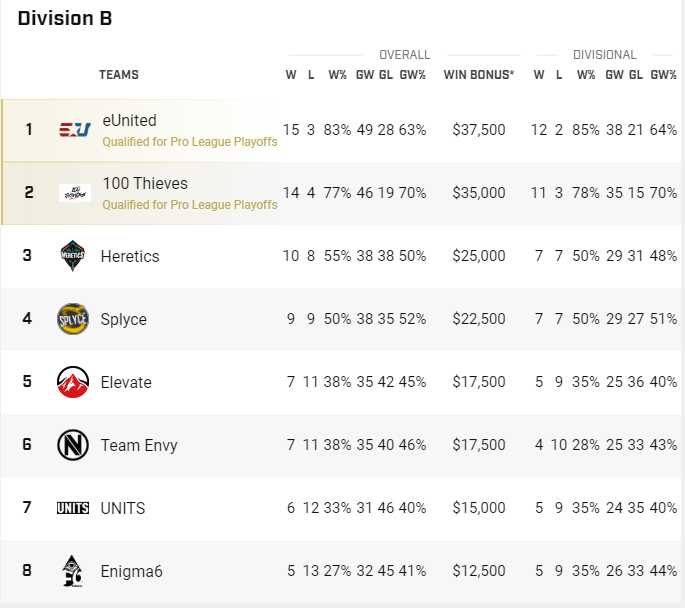 With E6 at the bottom of Division B, it looks like the org is open to new roster experiments to try out.

While there’s not a chance for E6 to go positive in their record through the 2019 regular season campaign, it should still give the new roster iteration a chance to make mistakes without too much on the line.

The changes will be something for Enigma6 to experiment with as they’re tied for last place in the Pro League alongside Luminosity with a record of 5-13.