The CWL season has led up to a Finals event filled with major headlines for championship contenders 100 Thieves, OpTic, FaZe Clan and more. Even though some have been playing out of their minds, others are having trouble finding their offense resulting in quick tournament exits.

Coming to the tail-end of the second day in Miami, OpTic Gaming found themselves in a quick hole getting sent to the losers bracket in a quick 0-3 effort against Luminosity Gaming.

OpTic get eliminated at CWL Finals

OpTic had a hard time getting into their groove throughout their time in the CWL Finals, but Greenwall fans were still hoping to see their team show signs of life against the 100 Thieves who also found themselves in the Loser’s Bracket.

Those signs of life weren’t flaring during the opening map on Gridlock Hardpoint, as the 100 Thieves were incredibly active on the map. Their offense made it hard for OpTic to get much going, quickly conceding the first game 166-250. 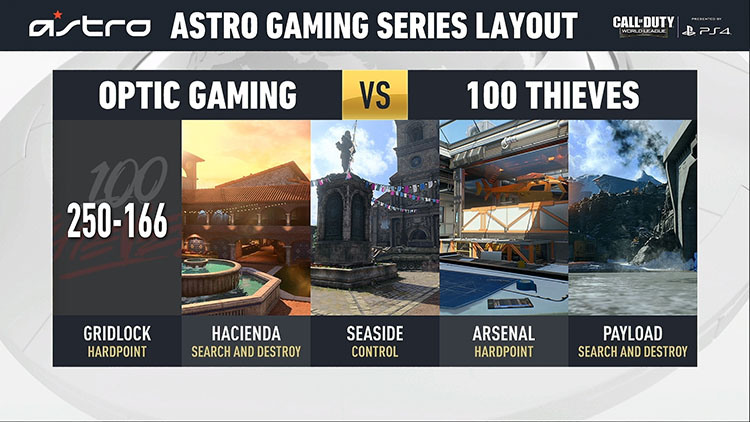 Given the map selection and talent on paper, the series between OpTic and 100 Thieves looked to be pretty competitive.
[ad name=”article3″]

Though it was OpTic who started to fight back during S and D Hacienda, but the Thieves weren’t letting up. While OpTic were able to come within reach of tying up the series, a convincing 100 Thieves defense killed any hope the Greenwall had of nabbing their first map.

100 Thieves capitalized on their momentum in the next map on Seaside Control, getting the better of a beaten OpTic side 3-1.

The win allowed 100 Thieves to move on while ending OpTic’s run at the CWL Finals. OpTic Gaming finish in 7-8 place alongside Splyce, each taking home $18,750. 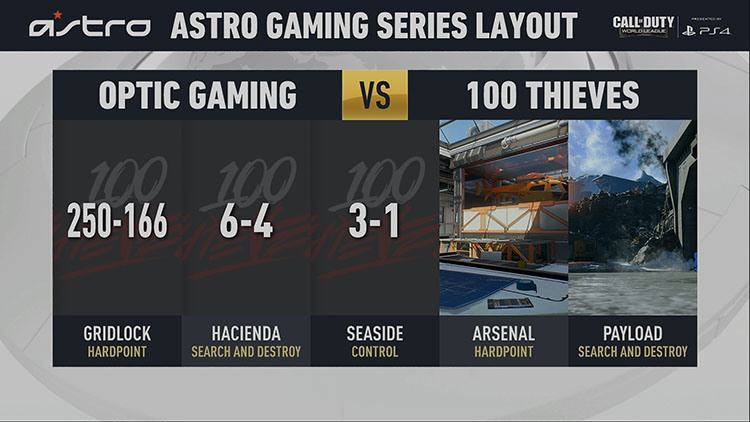 The OpTic series ended on a dominating note with 100 Thieves coming out on top.
[ad name=”article4″]

Two teams having strong CWL Finals showings are ready to go head-to-head to see who locks in their right to play in the Grand Finals.

FaZe Clan and eUnited have been tournament stunners so far. FaZe Clan had to get through the likes of the 100 Thieves in the second round and Luminosity Gaming right after, only conceding one map in both matchups.

.@FaZeClan onto the Winners Final!

The 3-1 over @Luminosity gives them a season-best placing with Championship Sunday still to come! #CWLPS4 pic.twitter.com/X8NLiLetd1

The eUnited squad fall under the same category having 3-0’d Reciprocity, and taking a convincing 3-1 series against Gen.G.

Both teams haven’t been giving their opponents much room to operate in their respective series, making the Winner’s Final a heavy bout between two teams playing out of their minds.